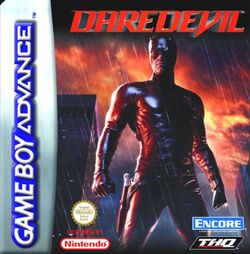 Kingpin is spreading rumors that he is paying Daredevil to eliminate criminals, causing many of them to target Daredevil in retaliation. Daredevil has to clear his name by fighting his way to the Kingpin.[2]

Retrieved from "https://marvel.fandom.com/wiki/Daredevil_(video_game)?oldid=5730806"
Community content is available under CC-BY-SA unless otherwise noted.