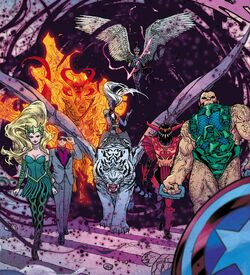 The Dark Council is an alliance of different beings from the Ten Realms with the objective to spread conflict for their personal gain.

Their first act of war was the massacre of the Light Elves of Alfheim, an event Malekith expected would surely bring the attention of Thor. Because of this, they tasked one person that was seeking admittance in the council, Loki, with carrying out the murder of the Goddess of Thunder.[2]

After the fall of Alfheim, Enchantress traveled to Midgard and enthralled the Hulk by offering him the position of King of the Ten Realms, then enraging him by forcing him to relive the deaths of Philip and Helen Cho.[3] While under her sway, Hulk robbed an outpost in Iceland where the Dwarves of Nidavellir were secretly storing Uru for fear of their realm falling to the Dark Council's army. Thor arrived and confronted Amadeus over his assisting Amora; however, Hulk did not remember what had happened, though with the help of his sister, Maddy, he convinced the Goddess of Thunder to allow him to try to make amends. Ultimately tracking the stolen Uru to Eyjafjallajökull, the trio discovered that the Dark Elves had indeed been forging weapons in preparation of the invasion of Asgard. This time the Hulk resisted Amora's enchantment, allowing him to defeat the Dark Elves, and after being tased by Maddy, the Enchantress cursed the Cho clan as she fled. The Uru was returned to the Dwarves and Thor departed.[4]

After inflicting havoc over various realms, the Dark Council launched an all-out invasion of Midgard and quickly conquered much of the planet, dividing it up among themselves. The world's heroes were overwhelmed by the Dark Council's numbers and were forced to retreat to Avengers Mountain. There, they began planning a counterattack. Using the restored Bifrost manned by Daredevil, a small team was sent into Jotunheim to rescue Thor who had been stranded there by Loki while Queen Frigga led a team into Svartalfheim to destroy Malekith's Black Bifrost, which what allowed the Dark Council to strike Midgard in so many places at once.[5]

A massive counterattack was launched against the Dark Council and slowly Midgard was retaken. However, Malekith had used his dark magic combined with magic from Stonehenge to turn the Venom symbiote into his own magical blade. He also held Odin and Frigga hostage and demanded that Thor face him alone, or his parents would die. So, Thor nailed himself to Yggdrasil on the Sun to learn how to rescue his parents. After sacrificing his left eye and the last remnant of Mjolnir, Thor learned that he needed to gather other Thors to help him.[7]

While Thor gathered past and future versions of himself, his allies began defeating the Dark Council's main players. Ulik, Amora,[8] and Sindr were captured;[9] the Minotaur was grievously wounded;[10] and the Queen of Angels[11] and Laufey were killed. Thor, his past and future selves, and Jane Foster empowered by the Mjolnir from the Ultimate Universe confronted Malekith at Stonehenge. Malekith at first was too powerful thanks to the powered Venom symbiote, but Thor was able to finally defeat Malekith by striking him with the reforged Mjolnir. The Venom symbiote separated from Malekith, and Malekith then lost one of his arms to the young Thor. Malekith attempted to rally his Wild Hunt and Bog Tiger, but they sensed his fear and devoured him.[8]

Ulik, Amora, and Sindr were later placed in a prison in Asgard made from the roots of Yggdrasil and watched over by the Ministers Three. The Minotaur ultimately survived his wounds and was able to escape blame for his role in Malekith's war by holding a press conference and stating that videos showing him participating in the war were doctored by Wakanda.[12]

Like this? Let us know!
Retrieved from "https://marvel.fandom.com/wiki/Dark_Council_(Earth-616)?oldid=6509202"
Community content is available under CC-BY-SA unless otherwise noted.