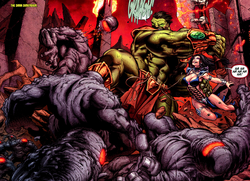 This Dark Dimension, also known as Subwhere,[1][2][verification needed] is where Dormammu and Umar were both banished to by the Faltine; ruled by Dormammu, who seeks to seize other dimensions to add to his realm. It is home to the Mhuruuks; humanoind extra-dimensional beings naturally adept at manipulating Magic.[citation needed] It was a Hell,[citation needed] and the largest part of the original Dark Dimension, that was shattered and became known as the Splinter Realms, or the Archipelago of Anguish and Redemption.[3]

The original Dark Dimension was once a single massive plane, but was shattered into many planes during a conflict long ago: the Splinter Realms, or the Archipelago of Anguish and Redemption.[3]

The largest remaining piece became known as the Dark Dimension. That status of largest and most aggressive dimension allowed it to successfully conquer and assimilate many of the Splinter Realms into itself, using mystic means to merge into a single domain, a synthesis of realities.[4] The dimension was inhabited by sorcerers known as the Mhuruuks.[citation needed]

The Mhuruuks' ruler Olnar dreamed of returning to the days of warfare and conquest.[citation needed]

The two fugitive Faltine known as Dormammu and Umar were banished to the Dark Dimension, where they befriended Olnar and played upon these desires. They showed Olnar how to make conquest of other dimensions and bond them with his own. Olnar greedily subjugated several dimensions and added them to his own domain.[citation needed]

In time, the rogue Faltines led Olnar to shatter the barrier between his dimension and that of the Mindless Ones. The Mindless Ones were a horde of soulless brutes that exist simply to destroy anything that lies in their path. The Mhuruuks were beaten back by the onslaught and many were slain, including Olnar. Dormammu and Umar then slew or exiled any wizards that might oppose them. Then they barred the Mindless Ones behind a great mystical barrier.[citation needed]

This battle weakened Umar, and she became subordinate to her brother. Dormammu ascended the throne as regent and ruler of the Dark Dimension. He re-assumed his Faltine form of flame, but Umar chose to remain in her humanoid form.[citation needed]

The Not-too-bright-dimension,[5] also known as the Dimly-Lit-Dimension-That-Didn't-Pay-Its-Light-Bill, was one of the many dimensions that Doctor Deranged could reach using his powers, and the headquarters of two of his enemies: The Dread Doormammoomoo; and his minions the (really) Mindless Ones.[6]

At one point, the lovely Cleanex, disciple and lover of Deranged,[6] spent a holiday with the (really) Mindless Ones at the Beaches of Raggador, in the Not-Too-Bright-Dimension. She took slides and later tried to show them to Deranged.[5] Later, Cleanex left Earth to live in the Not-too-bright dimension.[7]

Soon afterward, Doormammoomoo started manipulating Deranged using Benny Barumpbump, a young comic whom he imbued magick in. Inhabitants of the Not-too-bright-dimension noticed that Doormammoomoo was showing an irrational attention to Earth comedy. Cleanex suspected foul play and followed Doormammoomoo to Earth, in time to join Barumpbump and save Deranged.[7]

Later, when Cleanex disappeared, Doctor Deranged went to several dimensions looking for her, assuming that any of his enemies had kidnapped her. Deranged went to the Dimly-Lit-Dimension-That-Didn't-Pay-Its-Light-Bill and used the Flashlight of Mister Moto to see. There, he fought the (really) Mindless Ones and defeated them, but attracted the attention of Doormammoomoo. Deranged discovered that Doormammoomoo had not captured Cleanex, but nonetheless Doormammoomoo threatened Deranged. Deranged mentioned Doormammoomoo that his head was on fire, and Doormammoomoo ran away in dread through his domain.[6]

The witch Morgan Le Fay was exiled to an unnamed dimension five centuries ago, and she inhabits this weird-looking set along with her sponsor the Nameless One. Only in the twentieth century, the barrier between their dimension and Earth was weakened, and the Nameless One sent le Fay to Earth in a three-day quest to murder Sorcerer Supreme Thomas Lindmer and his successor Stephen Strange. Apparently unable to leave the dimension, the Nameless One nonetheless tracked le Fay's progress and chastened her when she failed to succeed. Eventually, le Fay captured Lindmer and imprisoned him in the dimension. Feeling attraction toward Strange, she took him to the dimension and tried to seduce him, but he refused her advances and defeated her. Le Fay was abandoned in the dimension, and even the Nameless One deserted her. However, soon afterward, le Fay was seen again on Earth.[8]

The Dark Dimension is a void within the Multiverse, namely the space between universes. Visibly it is distorted space with many of what appear to be planetary and bolide objects of varying color. One notable aspect; this dimension is highly anomalous and does not appear subject to conventional scientific laws - allowing those who draw power from the Dark Dimension; One effect of which those that draw energy can slow down their physical aging. The ruler of this dimension, Dormammu, feeds on worlds he manages to incorporate into the Dark Dimension. The Masters of the Mystic Arts managed to shield Earth from the Dark Dimension by building three mystical Sanctums, one in New York, one in London and one in Hong Kong.[9]

Like this? Let us know!
Retrieved from "https://marvel.fandom.com/wiki/Dark_Dimension?oldid=6523994"
Community content is available under CC-BY-SA unless otherwise noted.