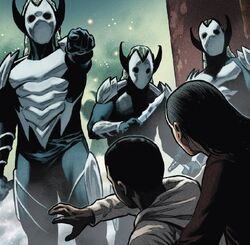 The Dark Elves come from the world of Svartalfheim, one of the Nine Worlds of Norse Mythology.

They are ruled over by Malekith the Accursed, and the most powerful amongst their ranks was Algrim the Strong. However, Algrim was betrayed by Malekith in a bid to kill Thor. Algrim was dropped into lava and, though he survived, he was critically wounded. The Beyonder transformed Algrim into the monstrous Kurse,[4] who seemingly killed Malekith for his betrayal.[5]

The trio of Bitterhand, Wormwood, and Grendell served Malekith loyally and have attempted to destroy Thor on several occasions, including once while Mjolnir was being reforged.[6]

Years later, Malekith revealed that he survived, and he set forth an ultimately unsuccessful plot for Hercules to kill Alflyse, the Dark Elf Queen of the Eastern Spires.[7]

For more details on this, please consult the page of The Accursed/Svartalfheim Civil War.

Years later, Malekith was broken out of Hel by Dark Elves loyal to him and returned to Svartalfheim with the commando's sole survivor Scumtongue. Seeing that his people had grown weak and wouldn't accept him as their ruler, he and his followers began hunting his kind to make them strong again, starting in a village where they massacred all save for the woman Waziria. Thor and the Warriors Three soon came, but Malekith escaped. He began a civil war in Svartalheim, targeting the Dark Elf refugees in the Nine Realms.[8] He tracked down Alfyse hiding in Nidavellir with the Dwarves and killed her, turning the Dark Elves into a state of civil war and chaos.[9]

Malekith's men hunted and killed Dark Elves refugees in all Realms, and were opposed by the League of Realms, a team formed by the Congress of Worlds, led by Thor and including members of the Nine Realms, joined by Waziria.[9]

He then showed up on Earth where the Council of the Unhallowed gathered, and after a fight, the council declared that they had decided to unite their people with Malekith as their ruler. Scumtongue was appointed senator in the congress of worlds.[10]

The Dark Elves existed before the Nine Realms, in the primordial chaos. Their goal was to destroy the current universe and return existence back to that state. They were believed exterminated after an attempt to do that five thousand years ago, but in reality, Malekith and a number of warriors escaped on a stealth ship and went into stasis until another attempt would be possible.[11] The Collector kept a member of the Dark Elves as part of his collection.[12]

Their stature vary also, from human-like to troll-like shape.[15]

They worship "strange gods" (according to the Cat Elves), including Llan the Sorcerer.[15]

Dark elves possess gifted intellects, as well as superhuman strength, speed, stamina, durability, agility, and reflexes. Some Dark Elves, like Malekith, can use fairy magic do shapeshift, teleport, project energy blasts, and so on.[citation needed] Dark Elves are also immortal, which means they live indefinitely but they can be killed by physical injury.[16]

All Dark Elves are vulnerable to the element of iron.[17]

Like this? Let us know!
Retrieved from "https://marvel.fandom.com/wiki/Dark_Elves?oldid=6509204"
Community content is available under CC-BY-SA unless otherwise noted.