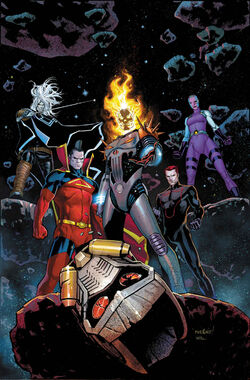 The Dark Guardians were brought together by Starfox after he read the last will of his dead brother Thanos who revealed that his resurrection would happen in the body of another. The Dark Guardians first mission was to find Gamora and kill her in hopes that she was the person it would happen to. To find her, they decided to locate Gamora's ex-lover Nova who might know where she was at.[1]

The Dark Guardians caught up to him and managed to make him crash-land on the planet Elynor-143. They cut off his connection to the Nova Corps and tried to convince him that it would be in his best interest to turn over Gamora, but Nova said he already picked a side and flew off at top speed so the Guardians couldn't catch him. Nebula chimed in that they will be able to track him due to the fact that he was beaten, confused, and bleeding out. With his connection cut off and being to far away from them the only logical place for him to go is to Gamora.[2]

They managed to find Nova on board Quill's ship and by luck Gamora was also aboard. Gladiator handed the Guardians of the Galaxy an ultimatum: hand over Gamora or they would blow them out of the sky. As they refused to hand her over, Gladiator fired an optic blast at The Ryder knocking it off course. They were forced to land with Beta Ray Bill setting it down on an unnamed planet. Both teams engaged in a battle as Gamora joined the fray by blasting her sister Nebula. Gladiator again shot his eye beams towards Gamora, but Quill jumped in front of her taking the hit instead. The Dark Guardians defeated the group as Quill laid there apparently died as Gamora held him,[3] though Quill would survive thanks to sturdy body armor.

The Dark Guardians took Gamora and brought her aboard her ship the Lilandra IV where she briefly met Starfox before ordering Gladiator to kill her. Gamora's execution was interrupted by the arrival of the Asgardian death goddess Hela who was planning to resurrect Thanos. She quickly took out Gladiator and the Rider. The Black Order arrived shortly after to make sure the remaining Dark Guardians didn't interfere. Wraith didn't put up a fight because he already received what he wanted for helping the Dark Guardians: info on the dark god Knull. Hela then revealed that Starfox was Thanos' vessel of resurrection, not Gamora, and Thanos' consciousness took over Starfox's mind shortly after. When the Guardians of the Galaxy finally arrived to rescue Gamora, they found her surrounded by the unconscious remaining members of the Dark Guardians.[4]

The remaining Dark Guardians agreed to join forces with the Guardians in order stop Thanos' resurrection. Using Lockjaw's teleportation ability, the Guardians and Dark Guardians stormed Knowhere and fought off the Black Order and a horde of Outriders. In order to stop Thanos' resurrection, Gamora killed Starfox, but this only caused Thanos to be brought back with a broken mind. When Hela fired a missile than would generate a black hole, Beta Ray Bill knocked it away with Stormbreaker, causing it to hit Thanos. The black hole generated then sucked up Knowhere, Thanos, Hela, and the surviving Ouriders while the Guardians and Dark Guardians escaped via Lockjaw.[5]

Like this? Let us know!
Retrieved from "https://marvel.fandom.com/wiki/Dark_Guardians_(Earth-616)?oldid=5822673"
Community content is available under CC-BY-SA unless otherwise noted.