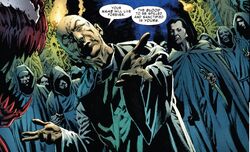 Origin
Cult worshiping the demon Chthon through the Darkhold[2]

Origin into the Pre-Cataclysmic Age

The Darkholders started out as Thulsa Doom's followers. After Doom's death at the hands of Kull, they used the Darkhold to create the first vampire, Varnae.[citation needed] Varnae turned some members into vampires.[citation needed] Other vampires were Nosferatu, Verdelet, Saracen, Maracen and Boy.[3]

Some of the first vampires,[3] such as Boy, Maracen, Saracen,[4] Verdelet,[5] and presumably Lamia became known as the Ancient.[3] It is unknown whether all or any of those were themselves Darkholders.

Surviving Darkholders managed to make off with the Darkhold before Atlantis sank.[6]

The Darkholders resurfaced. Led by DeGuzman, they secured a temporary alliance with Lilith, despite the opposition of other leaders (Lilith herself kept an open perspective on the use of the cult for her own purposes).

Under Lilith's instructions, they attacked Victoria Montesi, who was a reluctant heir to the Montesi responsibility of safeguarding the Darkhold, and seen by Lilith as a threat to it. As the assassins failed to kill Montesi, they were given to Lilith, who had the Lilin Doc to reshape them, to be faster and stronger. The next attack on the "Darkhold Redeemers (joined by John Blaze and the Ghost Rider (Dan Ketch) was repelled as well.[7]

After Lilith's defeat, the Darkholders sent hitmen to Washington to kill the Darkhold Redeemers (somehow knowing they were going there).[8]

They later took interest in Carnage. Barry Gleason orchestrated Cletus Kasady's meeting with them. It is later revealed that he is to be made as a sacrifice to awaken Chthon, based on the prophecy in the Darkhold that stated that "When the Red Slayer spills blood on sacred stone, he who sleeps shall wake and what walked will walk once again."[9]

Retrieved from "https://marvel.fandom.com/wiki/Darkholders_(Earth-616)?oldid=5755027"
Community content is available under CC-BY-SA unless otherwise noted.