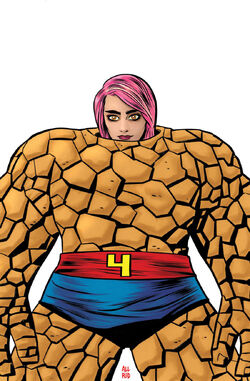 My name is Darla Deering, and I got my first recording contract when I was fourteen. By the time I was eighteen I had seven number-one hits, two golds, and one platinum record. I won a Grammy at nineteen, and ever since I could drive, I took home every Video Music Award that MTV ever nominated me for. I have twenty-nine million Yamblr followers. 67 million likes on Facespace. More people watched me on NewToob last year than go to the movies. And Bentley-23 is my friend.

Darla Deering was a pop star who dated Johnny Storm, the Human Torch of the Fantasic Four.

When Mr. Fantastic planned a trip through space and time, he tasked each member of the team to find a suitable replacement just in case, as the travel was through time, they would return four minutes after they departed.

As Johnny forgot to find one, he rushed to Darla's apartment and asked her to take his spot in the Fantastic Four, alongside Ant-Man (replacing Mr. Fantastic), Medusa (replacing the Invisible Woman) and She-Hulk (replacing The Thing), which she accepted. Four minutes after the Fantastic Four departed, they didn't return, prompting the newly cobbled together team to become the acting Fantastic Four and watch over the Future Foundation.[1]

Like this? Let us know!
Retrieved from "https://marvel.fandom.com/wiki/Darla_Deering_(Earth-616)?oldid=5327294"
Community content is available under CC-BY-SA unless otherwise noted.