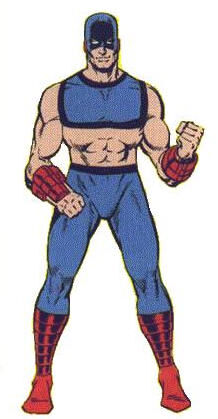 Darren Bentley was once a crimelord who was recruited by Cornelius van Lunt to become his Zodiac Cartel's Aquarius.[1] The Cartel fought the Avengers and were all able to escape.[2] Aquarius, along with Capricorn and Sagittarius, attempted to take back the Zodiac Key[3] after Nick Fury from Scorpion.[2] However, Aquarius, his allies, and several others were suddenly sucked into the Key and forced fight each other. Aquarius had to fight Madame Masque. Everyone was eventually released back into the outside world.[4] Aquarius and his allies managed to escape after holding Madame Masque hostage.[5]

Aquarius and the rest of the Zodiac Cartel threatened to wipe out everyone in New York City born under the sign of Gemini with a so-called "Star-Blazer" device as a show of their powers, but Avengers destroyed the Star-Blazer. Angry over this loss, Aries convinced Aquarius along with Leo, Cancer, Libra, Pisces, Sagitarrius, and the new Scorpion in a rebellion against van Lunt's leadership of the Cartel. When the Avengers arrived, van Lunt activated a trap that launched the rebellious Zodiac members and the Avengers into outer space. They eventually return to Earth, and the Avengers defeated both sides of the Zodiac Cartel.[6]

After getting out of prison, Bentley learned that he was dying from a rare lung condition and made a deal with the demon Slifer that enabled him to take on the appearance and attributes of any of the other twelve Zodiac members so he could take revenge on his enemies. Bentley was opposed by Ghost Rider and ultimately died when Slifer claimed his life and soul as payment.[7]

As Aquarius, Bentley had no powers as he was a normal human being. As One-Man Zodiac, he could take on the appearance and attributes of any of the members of the Zodiac Cartel.

Bentley had above average fighting skills.

Bentley's declining health made him physically unable to fight. Bentley had only a year to get his revenge on his enemies before being sent to Hell. However, by using each of the respective power sets of the Zodiac Cartel, he went through an entire zodiacal year, causing him to use up his entire time limit.

Any equipment a member of the Zodiac wielded

Any weapon a member of the Zodiac wielded

Like this? Let us know!
Retrieved from "https://marvel.fandom.com/wiki/Darren_Bentley_(Earth-616)?oldid=5519260"
Community content is available under CC-BY-SA unless otherwise noted.