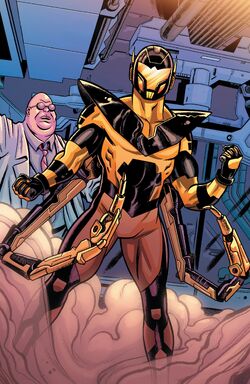 Darren Cross was a self made millionaire, he created and headed his company, Cross Technological Enterprises, and made it a success to rival the top competitors.[1]

However, Darren was diagnosed with a rare heart condition. He used his own technology to create an experimental nucleorganic pacemaker to save his life. Although a success, the nucleorganic pacemaker mutated Darren's body to and gave him superhuman abilities. A side-effect of the mutation was that Darren would quickly overuse and burn out his heart. Multiple heart transplants were performed, but each heart was removed when overused. Desperate, he kidnapped heart surgeon Dr. Erica Sondheim to replace his damaged heart. He also kidnapped 'donors' from slums.[1]

Ant-Man (Scott Lang), also looking for Doctor Sondheim to save the life of his daughter Cassie, attempted to rescue her. A battle between Darren and Ant-Man resulted in Darren burning out his heart and dying, Sondheim revealed that when Ant-Man interrupted the operation, she replaced Darren's old heart rather than placing a new one.[1][2]

His company was then taken over by Darren's son, Augustine Cross.[3]

After his death, Darren's body was kept in cryogenic state, and Augustine became obsessed with bringing him back to life, and eventually forced Dr. Sondheim to help him.[4] Augustine planned to used the heart of Cassie Lang, which could change size due to the exposure to Pym Particles, in order to replace his father's, as it could withstand the unique conditions.

While Scott Lang infiltrated Cross Technological Enterprises to rescue his daughter, he came across a rebirthed Darren Cross.[5] Darren engaged in combat against Ant-Man while the hero tried to buy time for Sondheim to transplant another heart into Cassie. Cross was ultimately forced to flee with his son when the Pym Particles now in his body caused him to shrink down.[6]

After the Power Broker demonstrated his Hench phone application to Cross Technologies,[7] Augustine enlisted the service of Ant-Man's employee Machinesmith to hack into the Power Broker's servers and create a copy of the app,[7] which he called Lackey.[8]

In retaliation for banking on his idea, the Power Broker manipulated Stinger, Cassie Lang's new costumed identity,[9] into infiltrating the Cross Technological Enterprises Facility to insert a virus into their servers.[10] Darren, Augustine and Crossfire found her out. They cornered her until Ant-Man came to her rescue. Stinger broke free from Cross' clutches, but Ant-Man ended up captured.[11] When Stinger and Ant-Man's allies raided Cross' buildings and retrieved Ant-Man, Augustine was severely damaged by a stray energy blast from Crossfire.[12]

In the search for a way to save his son, Darren became aware of a microscopic lab available inside Ant-Man's Helmet.[13] Cross kidnapped Egghead and took him to the S.H.I.E.L.D. evidence locker where the helmet was being kept after Lang was arrested, so he could access the laboratory and use it to save Augustine. While exploring the lab, Cross came across a prototype battle armor built by Hank Pym which used its wearer's Pym Particles as a power source to turn the suit into a quantum weapon. Captivated by the prospect of power, Cross donned the armor for himself.[14]

Cross' and Egghead's raid on Pym's lab was interrupted when the helmet was brought to the court during Scott Lang's trial. Darren decided to take advantage of having being unwittingly brought directly to Lang to have his revenge. The villains returned to normal size and attacked the court right after Ant-Man had donned the suit to demonstrate his powers. He overpowered Ant-Man and his allies, but Stinger infiltrated Yellowjacket's suit. She forced him to ingest a Pym Particle-neutralizing pill, of a type that Lang had been taking while in prison. The loss of his abilities caused Yellowjacket's suit to malfunction and shut down, causing Cross to plummet to the ground.[15]

Darren doesn't have his Nucleorganic Pacemaker anymore, but his mutation still persists, he has the following range of abilities because of it:

Superhuman Senses: Darren is able to hear and see insect-sized targets and interact with them with precision.[16]

Enhanced Strength: Darren is stronger than a normal human, but to which extent is not known.[16]

Lack of Control Over Powers: Cross can not control his size-alteration powers since they are triggered by the emotional state he is currently in. He grows bigger when angry and shrinks when he becomes calmer.[16]

Like this? Let us know!
Retrieved from "https://marvel.fandom.com/wiki/Darren_Cross_(Earth-616)?oldid=6171446"
Community content is available under CC-BY-SA unless otherwise noted.