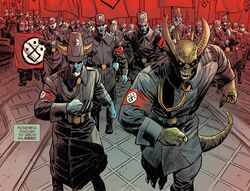 The Dartayus Union was a dissident political party in the planet Dartayus of the Negative Zone founded by Kologoth Antares. He amassed an army over the years by preaching about the deity Scythian, as a means to attract followers for himself. When the Dartayus Union became powerful enough to challenge the government, Kologoth was exiled to Earth. Kologoth's banishment rallied his people, who fought harder and longer, allowing them to turn the tide of the civil war in their favor and reach a stalemate.[1]

Retrieved from "https://marvel.fandom.com/wiki/Dartayus_Union_(Earth-616)?oldid=5200426"
Community content is available under CC-BY-SA unless otherwise noted.