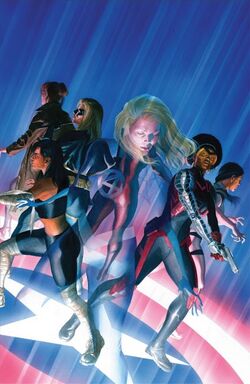 The Daughters of Liberty were preceded by the Daughters of Light, a group of young women in late 18th century Europe that preached freedom; however, that group disbanded when their leader was set to be beheaded, though one of her followers fled to the colonies.

The Daughters of Liberty made it their mission to protect freedom at all costs and to protect humanity against its own excesses and powers, ensuring these were used wisely. This included former Dryad, Harriet Tubman, helping lead over 300 slaves to the freedom of the North during the 19th century.

By the mid-20th century, Alexa Volkoff recruited Peggy Carter, a young Virginian tomboy, into the organization. Volkoff became Carter's handler and trained her to become a lethal agent.

Carter's first mission was to make sure that the Super-Soldier Serum inside Captain America never fell into the wrong hands, though the two fell in love during her assignment. She would later become the current Dryad.[1]

When Captain America was framed for the murder of General Thaddeus Ross, he turned himself into the authorities. This prompted the Dryad to bring together the modern incarnation of the Daughters to help clear his name, many of whom were summoned by Sharon Carter.[2]

After returning from blackmailing Mayor Wilson Fisk for information, Sharon met with Misty Knight, Bobbi Morse, and Ava Ayala to reveal to them that Ross' true murderer was the Foreigner, the ex-husband of Silver Sable.[3]

The Daughters met up with the Dryad in order to discuss their plans, with Toni Ho having downloaded the schematics for the Myrmidon. Jess Drew and Sue Storm Richards discussed using a prisoner, Eliot Franklin, to help stage a breakout. Bobbi suggested using brownouts to sneak in and the Dryad began doling out missions, stating she would go after the Foreigner herself.[4]

Five weeks later, Sue infiltrated the Myrmidon to begin enacting the escape plan and injected Dr. Franklin with an unknown substance that caused a blackout in the prison; meanwhile, the Dryad attacked five of the Foreigner's safe houses in New York City.[5]

Due to the blackout in the prison, the prisoners rioted, giving Rogers the chance to escape and meet up with Sue and Misty, who had apprehended the Myrmidon's warden, Baron von Strucker. Meanwhile, the Dryad faced the Foreigner directly, though their battle was cut short when Neo-Hydra attacked the two with a missile, seemingly killing the Foreigner. Bobbi and Jess then met with Sue, Misty, and Steve outside of the prison, while Sharon and Toni coordinated all of the missions.[6]

While the Dryad was having ex-S.H.I.E.L.D. psi-agents remove all pertinent intel from von Strucker's mind, the Winter Soldier was standing by, feeding information about Steve to Nick Fury on her request. During this time, Steve asked the Daughters to be his team, to which they agreed. Later on, Sharon met with Bucky and the Dryad to check on the status of von Strucker's intel, and the Dryad revealed herself to be Peggy Carter.[7]

On his first mission with the Daughters, Steve helped White Tiger protect immigrants at the U.S.-Mexico border from the Watchdogs, saving many with the added help of Echo, while the Dryad made sure Nick Fury found their Manhattan hideout.[8]

When a new Scourge began killing corrupt Russian mercenaries hired as NYPD officers by Mayor Fisk, Steve and Misty tracked down leads. This culminated in Steve, Misty, Sue, Bobbie, and Jess suppressing a riot on national television, and tracking Scourge to his hideout, where he committed suicide.[9]

Realizing Steve had discovered she was still alive, the Dryad had Agatha appear to him and inform him of the organization's history. She then revealed to him that all of the threats the Daughters had recently faced were linked in a massive conspiracy leading back to Volkoff, now known as Alexa Lukin, the wife of Aleksander Lukin.[1]

Having been stationed by the Dryad in Madripoor in order to monitor the Watchdogs, Black Widow discovered Crossbones and Sin's faction of Neo-Hydra working closely with the Watchdogs. Contacting the Dryad and Misty, the three met up with Thunderbolt Ross, whom Natasha had previously discovered was still alive.[10]

Contacting Sharon and Toni, Dryad and Misty watched as Ross explained to Sharon that he'd survived using an L.M.D. and explained that Lukin had helped with the war against Hydra, informing the Americans on various Hydra sleeper cells. Having become suspicious of her, Ross began looking into her, which caused Lukin to "kill two birds with one shield". However, the transmission shortly cut off after this.

During these events, Sharon and Toni watched on as Steve, Bucky and Sam engaged Selene in combat to recover the Blood Marine, a mystical gem made from Sharon's extracted soul, though Agatha quickly arrived with a new recruit for the Daughters; the Wakandan princess, Shuri.

Explaining that she and Agatha knew each other through their shared usage of the Mystic Arts, Shuri stated that Agatha filled her in on everything going on with Selene and Sharon's soul, and that it would be an honor to help her. Sharon accepted her help, and ordered Toni to help her get into the Iron Patriot armor. Agatha then teleported Shuri, Sharon and herself to the location of the battle with Selene.[11]

Like this? Let us know!
Retrieved from "https://marvel.fandom.com/wiki/Daughters_of_Liberty_(Earth-616)?oldid=6046911"
Community content is available under CC-BY-SA unless otherwise noted.