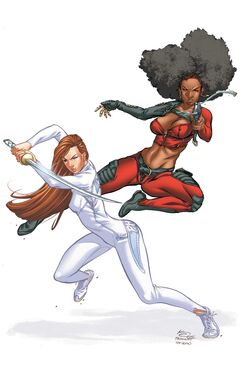 Team Aliases
Daughters of the Dragon

Knightwing Restorations Ltd. is a detective agency consisting of Colleen Wing and Misty Knight. It was during a fight with the Serpent that the duo of Misty and Colleen received the nickname "Daughters of the Dragon," a moniker sarcastically bestowed upon them by the villain.[1]

The Daughters of the Dragon frequently teamed up with Iron Fist, the pair worked with Luke Cage when they formed the Heroes for Hire.[2]

After a period of inactivity, Misty reformed the Daughters of the Dragon as bail bondsman, lending bail money to apprehended criminals until their cases worked their way through the criminal justice system. However, if they missed their court date, they would hunt them down and bring them to justice. They also hired Otis Johnson to work in the office. They investigated Celia Ricadonna, a wealthy New York publishing magnate and crimelord suspected of involvement in the deaths of some of their clients.[3] These criminal Freezer Burn, Humbug, 8-Ball and Whirlwind were hired to steal a microchip containing a computer virus capable of taking down the global economy.[4] She attempted to kill all the criminals involved in the heist.[5] When Misty confronted she sliced off her her bionic arm. Tony Stark, however, was able to provide and upgraded version.[6] Teaming up with Iron Fist and one of their client Humbug. They found the auction for the microchip, and brought Ricadonna into the authorities.[7]

Retrieved from "https://marvel.fandom.com/wiki/Daughters_of_the_Dragon_(Earth-616)?oldid=5130420"
Community content is available under CC-BY-SA unless otherwise noted.