For fictional versions of Dave Cockrum as a character within comic books and/or other media,
visit this disambiguation page.
Dave Cockrum 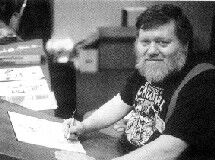 Dave Cockrum was a writer and artist for Marvel Comics. He was most widely recognized for his contributions to the "All-New, All-Different" X-Men. He died November 28th, 2006.

Dave Cockrum was born on 11/11/1943 in Pendleton, Oregon. Son of a Lt. Col. in the Air Force. Dave discovered comics at an early age, particularly the original Captain Marvel (then still being published by Fawcett and allowed to use his name as the logo of his book) and Blackhawk.

As Dave grew up, he began showing some artistic ability, and as he said, "I decided drawing comics was what I wanted to do. I took art as my major in school and on the side discovered the resurgence of such superhero comics as Hawkman, Flash and Green Lantern and later the Marvel line."

After spending six years in the Navy, he managed to get work at Warren Publishing in New York. They were publishing Creepy, Eerie and Vampirella, and it was Cockrum's first professional work. Later on, Dave landed a job as a background inker for Murphy Anderson, who was then inking Superman and Superboy for DC comics. After a year or so, he got his first big break: "the Legion of Superheroes strip became available and I got it. It was appearing irregularly as the backup feature in 'Superboy' when I got it." By the time he left the strip a year and a half later it had taken the book away from Superboy and he was merely a supporting character in it.

After the Legion, Dave went to Marvel and did a number of odd jobs--including penciling two issues of Giant-Size Avengers and inking six issues of the regular Avengers book--and then, little did he knew he would be offered the opportunity to make a legend. He was offered the opportunity to help revive the X-Men. Sure, he didn't create Wolverine, or Cyclops, or Jean Grey, Angel, Iceman and many other X-Men characters, but he made them cool, he made us love them. He is the guy who brought Wolverine to the X-Men in the comic Giant sized X men 1, in which Professor X forms a new team of X-Men, after Krakoa, "the Living Island", captures most of the original team and feeds on their mutant life forces. Wolverine resigns his Canadian commission, setting up events for later issues. Includes brief backstories for Nightcrawler, Storm, Colossus, and Thunderbird as part of the main story, and featurettes on Cyclops, Iceman, and Marvel Girl.[1] It was in this comic that Wolverine got his trademark mask, it was in this comic series that we first saw Wolverine without his mask showing us his trademark hairdo, it was in this comic book line that it was revealed to us that he was fluent in Japanese, that his rivalry with Cyclops began...

It was done so well that 25 years later it's still one of the best-selling comics in the business and has become the basis of an entire franchise empire based on toys, cartoons, action figures video games and, more recently, films.

Cockrum ultimately left X-Men after two stints on the book, to create the 'The Futurians,' a graphic novel for Marvel, and later did several issues for an independent publisher, Lodestone. When Lodestone plunged, he went back to several other companies including DC (again), Valiant, Defiant and Broadway, ultimately spending three or four years doing a book called 'Soulsearchers and Company' for Claypool Comics.

'The Futurians' material is scheduled to be reprinted in Europe.

Marvel Comics and artist Dave Cockrum reached an agreement on a contract that was supposed to allow Marvel to continue to fully own the many characters Cockrum created for the company while compensating Cockrum for his years of service and the seminal characters he created. In an undisclosed agreement, author Clifford Meth accepted a deal for Dave Cockrum that, combined with other industry events, will help get the Cockrum family back on its feet after months of financial burdens resulting from Cockrum's hospitalization.

Cockrum, who created such characters as Nightcrawler, Storm, Colossus, and Thunderbird as part of the X-Men, was at Bronx, NY, Veteran's Administration Hospital since December 2003 with complications from pneumonia, diabetes, and a possible stroke. He was initially placed on the critical list for more than a week, and then resided in a rehabilitation unit at the facility.

Like this? Let us know!
Retrieved from "https://marvel.fandom.com/wiki/Dave_Cockrum?oldid=6549216"
Community content is available under CC-BY-SA unless otherwise noted.