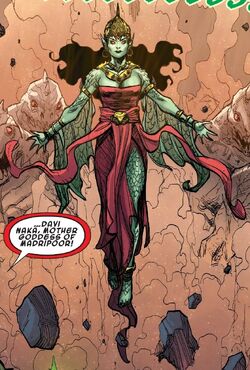 Davi Naka is the Mother Goddess worshipped in the small island-nation of Madripoor, located south of Singapore in the vicinity of the Indonesian archipelago.[1] She is the protector of all the world's dragons.[2]

In modern times, the Olympian drakon Ismenios, son of the Olympian war god Ares, plundered the underwater kingdom of Atlantis' greatest treasure hoard after the sacred sea serpent who protected the treasure went missing. Ismenios was caught by the Atlantean king, Namor, who was about to kill him for his transgression if not for the timely intervention of Davi Naka. As the protector of dragons, Davi Naka rescued Ismenios and placated the angry Atlanteans by imprisoning him safely within her own sacred temple in Madripoor.[2]

Months later, Ismenios' father Ares recruited Shang-Chi and Sword Master to infiltrate Davi Naka’s Madripoorean temple and rescue Ismenios. There, the trio were confronted by Davi Naka and her stone golems.  Ares charged at Davi Naka but was quickly overwhelmed by her combination of power and agility, while Sword Master's Sword of Fu Xi defied its wielder and instead sided with Davi Naka. The goddess explained to the others how she rescued Ismenios from the Atlanteans. Ares and Ismenios then attempted to leave the temple, but Davi Naka warned them that if they left under those circumstances then they would be held responsible by the Atlanteans for the disappearance of their sacred sea serpent.[2]

Davi Naka has exhibited tremendous superhuman agility and strength, putting her on a strength level equal to Ares, if not greater.  She is also capable of projecting powerful energy blasts from her hands that can injure other gods. She can generate large, bat-like wings from her back which enable her to fly. Davi Naka also commands a legion of powerful, stone golems that inhabit her sacred temple.

Like this? Let us know!
Retrieved from "https://marvel.fandom.com/wiki/Davi_Naka_(Earth-616)?oldid=6427413"
Community content is available under CC-BY-SA unless otherwise noted.