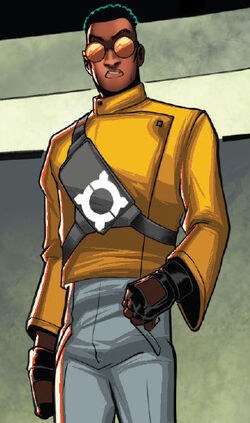 David Alleyne was raised by his father and mother with his younger sister, Kim, in their home in the Hyde Park neighborhood of Chicago, Illinois. Growing up, David was always bright and intelligent, but when his mutant powers activated, the answers just started coming to him. He quickly realized he was a mutant with the ability to telepathically absorb the knowledge and skills of anyone nearby. Concerned that this knowledge was not authentic, David kept his mutation a secret and began studying even harder. He began taking college-level courses while finishing high school and started working with Karma at the university library until he was outed by the hate group Purity. After his cover was blown, Danielle Moonstar recruited him.[9]

David was enrolled in the Xavier Institute, given the codename Prodigy, and placed on Moonstar's New Mutants Training Squad along with Surge, Elixir, Wind Dancer, Wallflower, and Wither.[1] Dani appointed Prodigy as team leader, but he declined and Wind Dancer took over. She turned out to have some limits, and in the end Prodigy and Wind Dancer chose to become co-leaders.[10]

In an attempt to increase his usefulness, Prodigy asked Emma Frost to remove the mental block despite Moonstar's apprehensions. Instead of removing the block, Emma and Dani secretly subjected David to a startling vision of a possible future should David's powers enhance. Frightened by this grim vision, Prodigy opted not to have his powers enhanced,[11] and began distancing himself from this friends especially Nori.[12] The revelation the Josh was having a secret relationship with Wolfsbane only deepened the rift.[13] In an attempt to mend bonds, Sofia tricked everyone into a camp-out on the grounds of the Institute. While bickering and even fist fighting broke out, Sofia was able to eventually reconcile her teammates.[14]

In the wake of the M-Day, David lost his powers.[15] To transform the X-Mansion into a mutant sanctuary, all depowered students were asked to leave. Unfortunately, the bus was blown up by the Purifiers, killing all aboard.[16] Luckily, David was not on the bus.[17] With the Danger Room inactive, Prodigy built the Danger Cave in the caverns below the school to allow his teammates to train after he left.[18] However, Cyclops and the Alleynes decided that it would be safer for him to remain at the mansion since Rev. William Stryker was targeting depowered mutants.[19]

When Stryker attacked the mansion, Prodigy was wounded by one of the Purifiers while protecting the Stepford Cuckoos. Deciding to become more proactive in their battles, Prodigy joined the New X-Men and helped to lead the assault on Nimrod at Forge's place in Dallas, Texas.[20] He proved useful to the team, and with the defeat of Nimrod, Cyclops offered Prodigy a permanent place on the New X-Men and at the Xavier Institute. His actions consequently red-flagged him by the O*N*E along with the other New X-Men.[21]

Along with his class and teammates, Prodigy was pulled into Limbo by Belasco during his search for Magik. He was interrogated by Belasco, and as he told him she was dead, Belasco tore out his heart in a rage.[22] Prodigy collapsed dead, but Elixir was able to act quickly and regrow his heart.[23] David then tended to the drained Elixir, freed the Stepford Cuckoos from Belasco's special telepathy proof helmets, and organized Mercury and Dust in battling Belasco. Belasco was finally defeated by Magik, who sent all the students and X-Men back to the mansion.[24]

The trip to Limbo deeply affected all the New X-Men. Fearing for David's life, Surge kissed Hellion in front of the other students in hopes of driving David away.[25] Prodigy decided to leave, but was confronted by the Stepford Cuckoos, who offered to restore all of the memories he had previously gained. Prodigy accepted the offer, and with his restored knowledge, he was made a junior teacher to the New X-Men, responsible for their training when the other X-Men were away.[8]

When the Hulk attacked the school, Beast ordered David to protect the other students, instead of taking part in the fight against the Hulk.[26]

When Surge decided to lead the New X-Men in an assault on the Purifiers in Washington, D.C., Prodigy disagreed with the decision and opted to remain at the mansion with Elixir and Dust.[27] Later, Prodigy aided Beast in providing medical aid to their wounded comrades in the infirmary.[28] He helped protect the wounded from the attacks of Predator X, and was part of the group teleported by Pixie to Muir Island for the climactic battle of the fate of Messiah baby.[29]

Although no longer a mutant, Prodigy moved to San Francisco when invited by the X-Men to join them in their new mutant haven. He helped in battling the Skrulls invasion force,[30] moving the X-Men to Utopia,[31] constructing a clean water system for the island,[32] and defending Utopia from the Evolutionaries.[33]

When the Mutant Messiah returned to the present, Prodigy aided Doctor Nemesis and the X-Club on Utopia.[34]

When Wolverine and Cyclops decided to part ways, Prodigy was a vocal proponent for remaining on Utopia with Cyclops.[35][36] He was later appointed leadership of the younger X-Men on Utopia.[37]

David opted not to return to Westchester to attend Jean Grey School for Higher Learning with the other young mutants despite urging from Transonic. He refused X-teams affiliation, as he sensed that the teachers and leaders were using them since the beginning. Instead, he joined a company hiring superhumans, as a hot-line consultant for exotic situations, as his former allegiance to Cyclops' X-Men and leadership of the Utopian students cataloged him as a terrorist.[37]

There, he met Tommy Shepherd of the defunct Young Avengers. Together they investigated a mysterious thief resembling Patriot, resulting in Speed's abduction.[37]

To rescue Speed, Prodigy tracked down the Young Avengers and joined them as they followed the Patriot across the Multiverse.[37][39] After officially joining the Young Avengers, Prodigy revealed his feelings for Hulkling and his bisexuality,[40] helped defeat Mother and Leah,[41] and finally rescued Speed from the Patriot.[42]

Prodigy later auditioned for the position of Chief of Security at Stark Industries, competing against Victor Mancha, Beetle, and Ant-Man. He ultimately lost the position to Scott Lang.[43]

Tommy and David had since started dating and often went out with Hulkling. When Teddy was feeling lonely because Billy was off with Strikeforce, they invited him to go drinking at a gay bar where Tommy teased Teddy about his relationship problems with his brother. After being approached by agents of the Kree-Skrull alliance, a group of Skrulls who wanted to kill Hulkling attacked the bar. Speed fought them alongside David.[44]

Prodigy later came to Krakoa, and was confirmed to have been killed and resurrected as a mutant again, joining the all new X-Factor Investigations.[7]

Prodigy is a mutant, who had previously lost his mutant powers due to the effects of M-Day.[15]

The Stepford Cuckoos unlocked all the knowledge in his mind that he had previously absorbed. As a result, Prodigy has access to all the knowledge and skills he had briefly obtained with his mutant power, but he cannot psychically gain new information from others.[8]

He has since regained his mutant status after being killed and resurrected by the Five.[7]

Psychomimetic: Subconscious, uncontrolled, form of limited telepathy, allowing temporary mimicry of skills and knowledge from nearby targets.[9][45] Prodigy could acquire mental and physical abilities, be it knowledge over a subject, a foreign language, or mastery of a fighting style. He could even predict the attacks of others in order to avoid them.[46] However, he was unable to retain that knowledge. When the person left his immediate proximity, Prodigy no longer retained information. Emma Frost described this mental block as a defense mechanism.[47] It is unknown after his resurrection by Krakoa if he still retains this mental block.

Even without his acquired knowledge, Prodigy is very intelligent. Without using his powers, he's completed college level courses while in high school,[9] operated complex technology, piloted the Blackbird,[5] and built the Danger Cave.[18]

Prodigy wears a visor/goggles with a headset and digital display for computer access, data analysis, and information files.[1][49]

Like this? Let us know!
Retrieved from "https://marvel.fandom.com/wiki/David_Alleyne_(Earth-616)?oldid=6445231"
Community content is available under CC-BY-SA unless otherwise noted.