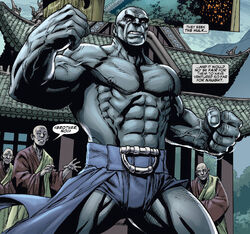 David Banner was an adviser to King James I, who replaced Sir Nicholas Fury when James took the English throne, and was also an advocate of eradicating "witchbreeds". He, along with Peter Parquagh, was then sent to Roanoke in order to kill Fury. He was caught in the energies of the Anomaly after shielding Peter from being exposed to the energies, and became a brutish monster; this world's Incredible Hulk.[1]

After considerable time in the New World, Banner was in doubt of where his loyalties lie to and what he has become: the very thing he despised (causing him to later regret his discrimination towards witchbreeds, and other atrocious acts). Also he have befriended and lived among a group of "Thunder Lizards" (dinosaurs), primarily with a mother brontosaurus that he helped in saving her baby that was trapped in a tar pit and from predators. As the Hulk, he came into conflict with the Roanoke colony when his dinosaur friends unintentionally invaded the settlement. He fought the shape-changing Virginia Dare, who changed into a tyrannosaurus-rex and lost her control and attempted to attack the mother brontosaur that he saved. Eventually Hulk reverted back into Banner and was hunted down by the colonists. [citation needed]

He was later rescued by Peter Parquagh (later known as The Spider) and took shelter among the Native Americans lead by Marioac. While with Marioac, Banner learns from her how to become a hero that his actions as the Hulk prove he can be as a way to redeem himself. [citation needed]

Banner later changed into the Hulk and joined Marioac and her tribe to fight against the English forces that came to arrest Banner and control Roanoke for secession from England. In the battle he came into conflict with Lord Iron (Anthony Stark), who had a past grudge with Banner for sadistically torturing him for weapons of secrets. Hulk tried to plead with Iron to abandon his vendetta, but Iron ignores him. The all out battle was brought to an end when Virgina turned into a sphinx-like creature and ordered everyone to cease fighting or she will "start eating." In help for ending the hostilities, Hulk destroyed every combatants' weapons. [citation needed]

After this Banner reconciled with Lord Iron, who realized his mistake, and turned himself in to the English, knowing that returning to England will mean certain death for him. Once in England, Banner was sentence to death by burning alive at the stake in front of King James' leisure. However, Banner changed into the Hulk and killed the king himself.[2] In his fight against hordes of English soldiers, James' castle was set on fire and Hulk escaped the country.

Banner later sought solace in China and spent in a Buddhist monastery to amend his well-being with the Hulk. There, he came to the defense of the natives against the dragon Dilong, who had just killed China's Emperor. Slaying the dragon, he was declared their ruler. [2]

In normal human form David Banner possesses the strength of a normal human male who engages in no regular exercise, when transformed he can lift far beyond 100 tons

Like this? Let us know!
Retrieved from "https://marvel.fandom.com/wiki/David_Banner_(Earth-311)?oldid=6471159"
Community content is available under CC-BY-SA unless otherwise noted.