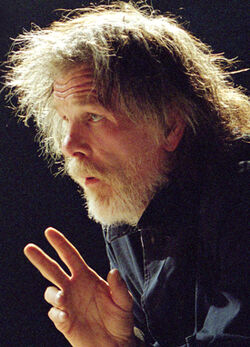 Do you really believe that I am separate from you?

David Banner was a genetics researcher who, in his quest to improve on humanity, experimented on himself; after his wife, Edith Banner, gave birth to Bruce, David, seeing that Bruce was not normal, barely showing emotion and gaining patches of green skin when he did, felt that he was responsible, realizing that his experiments on himself had affected Bruce. Trying to find a cure for Bruce's condition, David had his research shut down by Thaddeus "Thunderbolt" Ross; going into a rage over the loss of his work and the hopelessness of Bruce's situation, David accidentally destroyed his laboratory and tried to kill Bruce only to accidentally fatally stab Edith, before being arrested and confined to a mental institution; blocking his memories of David killing Edith, which haunt his nightmares, Bruce was taken into foster care.

Thirty years later, David was released from mental hospital and got a job as a janitor at the research institute Bruce worked at, in the same field as his father. Confronting Bruce on the night after he was blasted with radiation and nanobots, David revealed his relationship to him (Bruce had previously thought his biological father was dead) and stole some of his mutated DNA. Experimenting with Bruce's DNA on animals, David also saw his son's first transformation into the Hulk, which he soon became obsessed with copying to possess that power.

Releasing three dogs he had mutated to kill Betty Ross, who had confronted him over what has happened with Bruce, David called Bruce and told him of this. Defeating the mutant dogs and saving Betty, Bruce was tranquilized and taken to a military facility, which David followed him to. As Bruce was held captive, David subjected himself to the same devices that gave Bruce the ability to change into the Hulk, giving himself the ability to absorb the properties of everything he touched (similar to the villain Absorbing Man from the Hulk comics). Finding Betty, David told her that he will turn himself in if he was allowed to see Bruce one more time, also revealing to her that he had intended to murder Bruce (believing he would mutate out of control) when his research was originally shut down and that instead he ended up killing Edith when she tried to stop him.

Taken to Bruce, David was placed in a room with him, where they were placed between two electrical generators that would kill both of them if things went out of hand. Having descended into megalomania, David ranted to Bruce about how the military has ruined their lives, also stating that the Hulk was his true son, and Bruce was just a shell for him. Biting some electrical wires, David became a being of pure electricity while Bruce, upon seeing this, becomes the Hulk. Breaking out of the military facility and engaging each other, David and the Hulk crash into Pear Lake, where David, becoming a being of stone and water, tried to absorb all the Hulk's energy, which the Hulk allowed. Unable to contain the Hulk's energy, David swelled into a gigantic energy bubble, which was blown apart by a Gamma Charge launched by General Ross, killing David, while leaving Bruce unharmed at the bottom of the lake after his father absorbed the full force of the explosion.

Retrieved from "https://marvel.fandom.com/wiki/David_Banner_(Earth-400083)?oldid=6295924"
Community content is available under CC-BY-SA unless otherwise noted.