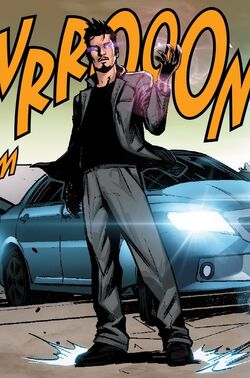 David Bond was a struggling illustrator for a sales company. His mutant powers activated during a dispute with his girlfriend Karen, and David discovered he could control vehicles.[1] Accompanied by Karen, David tested out his powers at a parking lot during the night. The commotion caused by David's use of his powers caught the attention of the local police and they quickly apprehended him. Out of fear and self-preservation, Karen outed David as a mutant. David tried to escape using his powers to make the patrol cars drive off on their own as a distraction, but was shot while fleeing. He was rescued almost immediately by Magik and the Stepford Cuckoos, members of Cyclops' X-Men. They took David to the New Charles Xavier School for Mutants, healed him, and offered him a place among the X-Men.[2]

During a training session with the other X-Men students, Cyclops had David practice using his new abilities on a recently-constructed miniaturized Blackbird. After nearly crushing everyone under it, he and the rest of the team picked up a call that one of their former numbers, Fabio Medina, had been snatched up by a S.H.I.E.L.D.-sanctioned new mutant response division headed by Dazzler.

After having rescued their comrade, Cyclops had Hijack (the code-name given by Cyclops to David) brought along to see if he could test both the upper and outer limits of his power. Hijack accomplished this by commandeering the entire S.H.I.E.L.D. Helicarrier that had detained their ex X-Man, steering it clear over the Caspian Sea just before escaping with the rest of his team.[3]

David later appeared at a pro-mutant rally alongside the others and assisted in the battle against the Blockbuster Sentinel. While his powers were not able to work on it (although it is unknown if it was because it was not a vehicle or the Sentinels state as something between mechanical and biological) he protected Cyclops by directing a bus into it.[4] During a training trip to Tabula Rasa, David made a mistake by using his cell phone despite being warned that it would be tracked. As a result, S.H.I.E.L.D. and members of the Avengers showed up and confronted the team. Because he was warned and unrepentant, he was kicked out of the school and sent back to his old home.[5]

After readjusting to a regular life, David was visited at his house by a S.H.I.E.L.D. garrison headed by Director Hill, which had preemptively moved away every automotive device within the vicinity.[6] Hill interrogated David about Cyclops' location, but she was diverted by an alert of the X-Men's next appearance and headed out. After this incident, Hijack sought to rediscover his purpose in life, but little did he know that another S.H.I.E.L.D. agent set up near his dwelling had been keeping tabs on him for home base.[7]

When a commotion brewed between S.H.I.E.L.D., Cyclops' X-Men, and the Jean Grey School, Dark Beast hijacked S.H.I.E.L.D.'s Sentinel and Helicarrier fleet and opened fire on the institute. Witnessing the situation from afar, David snatched up a car from an onlooker and headed to the eye of the storm. He successfully used his powers to steal control of the armada from Dark Beast and make the Helicarriers shoot down the Sentinels. When the X-Men confronted the villain at his base, he died from long-lasting injuries caused by self-experimentation, and left a self-destruct sequence activated. Cyclops had Magik teleport Hijack to their location and use his powers to deactivate the countdown mechanism.[8]

After Cyclops disbanded the New Xavier School and requested that the students enrol in the Jean Grey School, David, along with the other students, were outraged. They assisted Dazzler in capturing Mystique. Later at a gig that Dazzler was performing at, David, Fabio, Christopher, the Stepford Cuckoos, and Benjamin concocted a plan to not join the other school and remain as an independent group.[citation needed] However, after a catastrophic first outing attempting to subdue the rioting mutant Animax, the young mutants conceded and joined the Jean Grey School.[9] Hijack remained part of the institute, and was seen among the student body when it had been rebranded as the Xavier Institute for Mutant Education and Outreach.[10] Hijack also appeared to have taken a job as an enforcer-for-hire, having once been hired by the board of Stark Industries to confiscate Ironheart's armor on their behalf, to no avail.[11]

David Bond is a mutant and was stated to be one of the "too powerful for the world" ones by Maria Hill.[8]

Technopathy: Hijack has the ability to usurp control of vehicular mechanisms with his thoughts. All he has to do is focus his mind on said device and he can make its engines run, doors open and close, or ride through hoops by ordering it to do so. So far the upper limits of his control have not been discovered; to date he has shown he can jury-rig an entire Helicarrier with moderate effort[3] and later on re-commandeer many of them when they were already controlled by another person, while stopping countless giant and human-sized Sentinels both standard and Blockbuster variants in their tracks.[8] Hijack's ability also works on hi-tech armor worn by S.H.I.E.L.D. agents.[5]

Like this? Let us know!
Retrieved from "https://marvel.fandom.com/wiki/David_Bond_(Earth-616)?oldid=5828781"
Community content is available under CC-BY-SA unless otherwise noted.