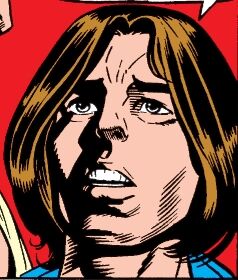 Dave Carter and his friends Jason Grey, Ellie Roberts, and her brother Eddie Roberts found Adam Warlock in the desert when he first came to Counter-Earth. The four befriended Adam and were his companions for a time.[1]

Later the Hulk who was marooned on Counter-Earth joined Dave, Jason, and Ellie in their resistance movement against Man-Beast. Dave, Ellie, and Jason witnessed Hulk and Warlock leave Counter-Earth.[citation needed]

Counter-Earth was later destroyed by Thanos. Jason, Ellie, and Dave are presumed dead.[3]

Like this? Let us know!
Retrieved from "https://marvel.fandom.com/wiki/David_Carter_(Counter-Earth)_(Earth-616)?oldid=5722804"
Community content is available under CC-BY-SA unless otherwise noted.