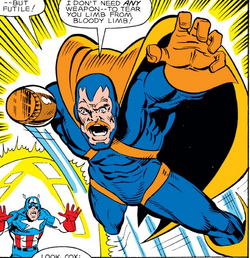 Dave Cox was originally portrayed as a wounded Vietnam War veteran. He lost an arm in the conflict and had became a conscientious objector that renounced violence. He was captured and tortured by the Serpent Squad, but still refused to fight the villains. Captain America noted his admiration for Dave's convictions.[1]

Dave grew romantically attached to Sharon Carter. When she and Steve Rogers had a disagreement, Dave's shoulder was available for Sharon to cry on. Dave's feelings for Sharon; however, were unrequited.[2]

Later, Steve Rogers sought out Dave and they both discussed what they thought was the untimely death of Sharon Carter. Dave had moved on his life and now had a wife and child. In a cruel demoralizing plot, the Red Skull kidnapped Dave, brainwashed him and gave him the cloak and powers of the Devil-Slayer. Despite their friendship, Captain America was forced to defeat Dave. The Skull relished the fact that Captain America had to seriously injure his friend, Dave, in order to defeat him.[3]

Dave apparently later recovered from his injuries and brainwashing.[4]

Like this? Let us know!
Retrieved from "https://marvel.fandom.com/wiki/David_Cox_(Earth-616)?oldid=4257540"
Community content is available under CC-BY-SA unless otherwise noted.