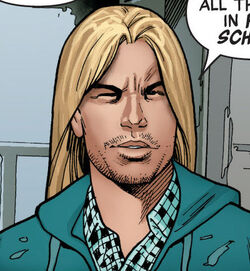 He leased a 3rd story office to Luke Cage. Cage inflicted almost constant damage to the facility, including wrecking his theatre.[2] However, Griffith remained a close friend to Luke. For a period of time in his life, Cage considered D.W. Griffith his only friend.

Griffith sometimes proved quite useful to Cage in his adventures. Griffith used his expertise of audio-visual equipment to let the residents of Security City know the true evil intentions of Cage's nemesis Gideon Mace[3]. Later he valiantly attempted to free Cage from the hypnosis of the Circus of Crime.[4]

D.W. was also a "film student" [5] and attempted to produce his own productions. Once Dave became somewhat depressed, considered taking a lethal dose of Acid Z, and jumping off the Brooklyn Bridge. However, a mysterious stranger convinced him to be happy with his life, regardless of which stage it was presently in.[6]

D.W. was contacted by Cage again when he formed the Mighty Avengers, he asked him if they could use the Gem Theater as their base, to which he agreed.[7]

Like this? Let us know!
Retrieved from "https://marvel.fandom.com/wiki/David_Griffith_(Earth-616)?oldid=4871540"
Community content is available under CC-BY-SA unless otherwise noted.