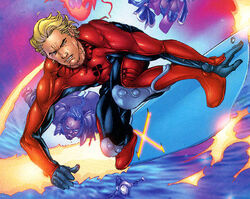 Davis Cameron was just a normal Australian surfer until the X-Treme X-Men found him and his sister Heather and told them that they were really the children of a deceased Sydney crime-lord. Not knowing that these people were mutants, Davis became enamored of Storm, and managed to get in a dance with her before they were all attacked by Tong assassins. Heather revealed that she was a mutant, as did the X-Men, which Davis found very cool.[2]

When Lifeguard was subsequently abducted by the alien invader Shaitan as she attempted to rescue Gambit, Tessa revealed to Davis that he was a latent mutant, and that his power could help find his sister. Davis allowed Sage to activate his latent powers so he could locate Heather and transport the team to her location. Davis helped the X-Men as they fought against the invasion, but his inexperience showed when he defended Rogue against Vargas, who wounded him badly.[3]

Unfortunately for Davis, while he was recovering, his sister underwent massive physical changes that revealed her Shi'ar heritage, making her unrecognizable to him. He rejected her when she came to see him and left the hospital as soon as he was able, telling her not to try to find him. Both Lifeguard and Thunderbird continued to search for him.[4]

Davis was depowered as a result of the Scarlet Witch during the M-Day crisis,[5] and was presumably still sought by his sister and Thunderbird.[6]

Davis was somehow repowered and joined the mutant nation of Krakoa. He was seen helping fight off the Russian Armed Forces that attacked the island.[7]

Slipstream is a mutant.

Warp Wave: He can form a quantum portal, a funnel of trans-spatial energy that swallowed up him and any passengers to transport them over vast distances. The warp wave used super-strings to connect any two locations on Earth. Sensitivity to displacement energy signatures enabled him to track other teleportation effects back to their origin from residual energies. After detecting this, he could use the warp wave to travel to their location. He navigated with the use of a shortened metal surfboard. Slipstream could take other people through the Warp Wave, but required increased concentration to maintain the wave. Davis was tired after this, but presumably he would become more proficient the more he used his powers.

Davis is an excellent surfer.

Davis used a hover-board to help him navigate.

Like this? Let us know!
Retrieved from "https://marvel.fandom.com/wiki/Davis_Cameron_(Earth-616)?oldid=5751584"
Community content is available under CC-BY-SA unless otherwise noted.