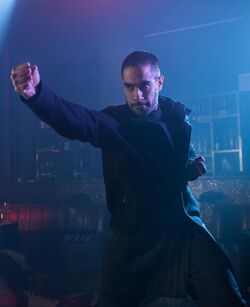 You did it Danny...The trial of Shou-Lao...You survived...You're the Iron Fist! Our people need to meet the Immortal Weapon. I'll be your second. Standing beside you on the pass. Protectors of K'un-Lun.

Davos is the son of Lei-Kung, the leader of the Order of the Crane Mother in K'un-Lun.[2]

When young Danny Rand was discovered by Chodak and Tashi brought to K'un-Lun, he and Davos formed a close friendship. The pair trained together and also engaged in mischievous behavior.[3][2] Both young men were trained and prepared for the opportunity to face the trial of Shou-Lao and become the Iron Fist, but only Danny was chosen. When Danny survived the trial and became the Iron Fist, Davos volunteered to serve by his side. Together they guarded the pass to K'un-Lun until the day Danny disappeared.[4][2]

Davos left K'un-Lun shortly after Danny's disappearance and, using the internet, he tracked Danny to New York City.[2] Davos initially took vigil outside the Rand Building before tracking Danny down at the Chikara Dojo and then following Bakuto and Colleen Wing as they took Danny to Hand Compound.[5]

Shortly after discovering that Bakuto and Colleen were part of the Hand, Danny was rescued by Davos.[6] Because Danny was injured in the fight with the Hand, he and Davos sought out Claire Temple who administered some medical care to Danny.[2] Despite Davos' objections, Danny reunited with Colleen and the trio took on Bakuto and the Hand. After defeating Bakuto, Davos delivered a fatal blow, which led to violent falling out between he and Danny.[7]

Formerly Chi Augmentation: The power of the Iron Fist is granted to a single warrior of the Order of the Crane Mother, and empowers that person allowing them to channel their chi for a variety of effects. The effect is typically accompanied by a brilliant yellow luminescence emanating from the wielder's hands, or in Davos' case, a red luminescence in both his hands. The empowerment is temporary, effectively draining the wielder's chi until it is spent, and is then inaccessible for a time until the chi is replenished. The Iron Fist is also bound to the mental state of its wielder, and can be rendered inactive as a result of the wielder's emotional state, or inhibited by the effects of pacifying drugs. Davos' training has resulted in a fuller mastery of this power.

Like this? Let us know!
Retrieved from "https://marvel.fandom.com/wiki/Davos_(Earth-199999)?oldid=6073924"
Community content is available under CC-BY-SA unless otherwise noted.