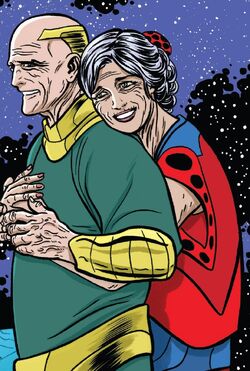 Dawn Greenwood lived with her father Reg and her twin sister Eve in Anchor Bay, Massachusetts.[1] Reg's wife Libby abandoned them when Eve and Dawn were young.[2] Dawn regarded Anchory Bay as the most special place in the world, for which she remained there her entire life, whereas Eve travelled around the globe.

When Dawn was eight years old, she wished upon what seemed like a shooting star that it could stay up in the sky forever so everyone could get a wish. Unknown to her, the shooting star was actually the Silver Surfer. Dawn's wish bonded the two beings, as wishes have a powerful effect in probability.[1]

Many years later, Dawn was abducted by the Incredulous Zed to the Impericon so she could be used as leverage to force the Silver Surfer to fight the Queen of Nevers. Dawn was supposed to be the most important person in the universe to the Surfer, which had been determined by a machine who looked into the Surfer's true self; however, the surfer himself didn't even know who she was.[1]

The Surfer returned Dawn to Earth, but at a time the entire Earth was unknowingly and slowly falling to Nightmare's influence, due to an unusual universal lunar alignment. With the help of Doctor Strange and the Hulk, Dawn and the Surfer managed to free the Earth. During this event, Dawn discovered that her actual dream was to explore the universe with the Silver Surfer, and after sorting things out, left Earth with him to discover the galaxy.[5]

After lending Dawn control of his surfboard, the Surfer and his companion accidentally landed on a cloaked planet called Newhaven. The 666 billion inhabitants of this world were soon revealed to be the sole survivors of their respective species after their planets had been devoured by Galactus. They identified the Surfer, and his past came to light for Dawn Greenwood. Dawn rejected Norrin, and the Surfer left her behind on Newhaven at her request. Unfortunately, the returned Galactus would follow the trail left by Norrin's surfboard in order to find his former herald, and in the middle of said trail was Newhaven.[6]

As soon as the Surfer returned to Newhaven in order to give Dawn the opportunity to return to Earth if he wished, Galactus arrived as well.[7] The billions of inhabitants from Newhaven were inspired by the Surfer's origin to propose Galactus to become his herald, but he rejected them, as their respective planets had already been destroyed and they were nothing to him. Because Galactus had never destroyed the Earth, Dawn proposed to become his herald. The Surfer tried to prevent Galactus from transforming Dawn at the same time he muttered his motive: his love for Dawn. The Earth girl's sacrifice inspired the inhabitants of Newhaven to evacuate their planet and give it to Galactus in exchange for the girl. Newhaven was destroyed, but the Surfer swore to become the herald of its survivors in order to find them a new planet to live in.[8]

During the weeks of searching, Dawn was capable of forgiving the Surfer, but couldn't bring herself to tell it to him. Their journey ended when the Surfer finally discovered a suitable planet, with a special adaptive atmosphere which allowed the survival of the different specimens from different races.[9] As Dawn was deciding on whether to return to Earth or not, months were spent at this "New Newhaven," where Dawn began getting close to the Surfer once more. Norrin subsequently sensed something was wrong, used his powers to reveal the planet's true nature, and "New Newhaven" revealed itself as Euphoria, a living creature who had used its adaptive atmosphere to protect itself from the survivors' grief by inducing them happiness and controlling their actions to ensure their well-being. A group of the survivors decided to leave the planet as they didn't want to be Euphoria's puppets, but the vast majority remained on it. Now the Surfer and Dawn were free of its influence and decided to return to Earth. Dawn confessed her true feelings to Norrin without being influenced by Euphoria any longer, and kissed him as they departed.[10]

During their continuing journey to explore the universe, the Surfer and Dawn found themselves attempting to outrun the collapse of the Multiverse caused by the final incursion. They managed to escape to a plane of non-existence, a Land of Couldn't-Be Shouldn't-Be, with the help of Glorian.

When the Norrin encountered Eternity, all that remained within him was the newly created Battleworld and its satellite Knowhere, fashioned by the sheer force of will of God Emperor Doom. With the remains of the Multiverse under Doom's control, Glorian offered the Silver Surfer a chance at recreating the old universe with the power of his master, the Shaper of Worlds.[11]

At the behest of the Shaper of Worlds, Dawn and the Silver Surfer then began recreating the known universe, with Glorian and the Surfer focusing on the cosmic, while Dawn and Zee concentrated on Earth. But the pair soon began to alter things to their own desires. The Surfer resurrected then killed Galactus; meanwhile, Dawn quickly realized that her crafting was merely two-dimensional, so she accidentally created another Silver Surfer to help her, but all the changes upset the Shaper of Worlds.[12]

Once most of these anomalies were dealt with, only the duplicate Silver Surfer remained. The Shaper made Dawn choose between one of the Surfers, however, Glorian was impatient for the universe to be finished and killed the Shaper, whose power had been depleted during the creation of the universe. Glorian revealed that his ultimate goal was to break free from the Shaper's commands, for which he had waited until his master was weak enough to kill him.

The Surfer and Dawn managed to escape from Glorian and bring back the Queen of Nevers, whose heart had been recreated in this new universe. The Surfer was forced to choose between Glorian's universe and what remained of the rest of the Multiverse. However, at that very same time, the old universe was brought back. The Silver Surfer managed to resist the temptation of Glorian's perfect universe, which was in the end a simply hollow day-dream. The Surfer chose his old universe, and returned with Dawn to it to continue their journey of exploration.[13]

Dawn and Norrin returned to Earth for a short while to visit Dawn's family, and learned in the process that Eve had married and was expecting a baby.[14] Before returning to space after an Earth-bound adventure, Norrin reunited Dawn with her estranged mother,[2] though the reunion did more harm than good and prompted Dawn to ask the Surfer to leave the planet without saying goodbye to her family.[15]

One of Norrin and Dawn's ensuing adventures took them to the planet of Inkandessa 4, where all of its inhabitants had had their consciousness copied into holographic forms of solid light to avoid leaving any impact in the ecosystem, using devices called Holo-Pods to scan their essence. Due to Dawn's nature as an organic being, she was unsuspectingly scanned against her will and replaced with a holographic Dawn Greenwood. Though Dawn's duplicate rescued the real Dawn from being killed, she had to stay behind in Inkandessa 4, as all Light-Forms needed to remain in the planet to continue existing.[16]

Dawn and Norrin returned to Earth briefly afterwards to meet Dawn's newborn niece, Regina. When they arrived, they also learned that Dawn's father Reg had died of heart issues shortly after the baby's birth.[17] Dawn requested the Surfer to return to Euphoria to help her cope with her father's death. They remained there for sixty-seven days until Dawn came to terms with her loss.[18] However, Dawn felt the need to say goodbye to Reg, and asked Norrin to travel back in time to see him for one last time. Norrin conceded, but accidentally overshot, and they ended up in the time before the Big Bang, in the iteration of the universe from where Galactus hailed, with no way to return home.

Together, they explored the universe for decades, and married in the process. Norrin used his Power Cosmic to alter his appearance and age together with Dawn. As Dawn reached her golden years, she and Norrin settled in Taa. To make up for their inability to continue exploring, Norrin spent the rest of Dawn's days sharing his adventures from before he had met her. On her deathbed, Norrin and Dawn recalled their first meeting.

When the universe was coming to an end, Norrin transformed Dawn's buried remains into energy and took it with him inside Galan's Incubator, where he could survive the death of the universe and emerge in the next one. The Surfer fired Dawn's bolt of energy at the start of creation, which became the very first light in the universe, forever echoing throughout all of time. In this moment Norrin additionally crafted the energy signature of the Power Cosmic, red with black dots, and dedicated it to Dawn so the love and memory of her would flow forever through him.

The Silver Surfer proceeded to observe the history of the universe alone as he waited for the present to catch up with him. He eventually decided to visit Earth when Dawn was eight years old, under the disguise of Norville Rapaport. Having become a regular fleeting visitor of the Greenwood Inn, Norrin spent time with Dawn and watched her grow with each summer he visited. Following Dawn's capture by the Incredulous Zed and her rescue at the hands of his past-self, Norrin became a silent follower to the adventures his past-self shared with Dawn until the moment they travelled to before the Big Bang.[19]

Like this? Let us know!
Retrieved from "https://marvel.fandom.com/wiki/Dawn_Greenwood_(Earth-616)?oldid=6438888"
Community content is available under CC-BY-SA unless otherwise noted.