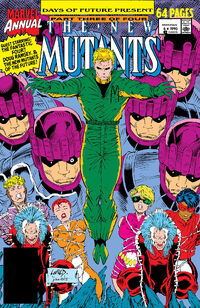 In the possible future seen in Days of Future Past saga, Franklin Richards (son of Reed and Susan Richards of the Fantastic Four) fell in love with Rachel Summers (daughter of Cyclops and Jean Grey of the X-Men). During a desperate mission to overthrow the mutant-hunting Sentinels who ruled that future, Franklin was killed.[1]

As it turned out, Franklin Richards sent his dreamself back in time in the instant before he died. The trip left him disoriented; it also unlocked his reality-warping powers. He replaced the new Four Freedoms Plaza building with the old Baxter Building and a previous version of the FF. On arriving home, the current FF were understandably taken aback to meet themselves. After a misunderstanding, the two teams compared notes. Both teams had a version of Franklin, but the younger team's version appeared as an infant to them and as an adult to the real team. Franklin failed to convince the real Richardses that he was their son and, frustrated, disappeared. Everything returned to normal ... until a horde of robots poured out of a portal.[2]

Franklin went to Professor Xavier's school but found it in ruins. He restored it to its future state, when he spent time there as a New Mutant, and populated it with those future mutants. The current New Mutants, deep underground in the Danger Room, fought briefly with the new New Mutants. Franklin insisted that the current mutants were imposters and, frustrated again, disappeared. The FF arrived, looking for Franklin, followed by another horde of robots. This time they also faced the robots' master, Ahab, a mutant-hunter from Franklin's future, but he retreated. The FF and the New Mutants tracked Franklin to the American Museum of Natural History, where they battled Ahab, his robots, and a Sentinel. Franklin erased the robots and the Sentinel from reality. Aghast, he relocked his and his younger self's powers.[3]

The FF enlisted X-Factor to help them find Franklin. Rachel Summers (who traveled back in time after Franklin died in the future but arrived before he did) tried to get through to him but failed. The FF, the New Mutants, and X-Factor located Ahab's base and sent him back to the future. Franklin then kidnapped Nathan Summers (the son of Summers and Grey in this reality, who would become Cable).[4]

Franklin met Rachel again and recovered his composure. Ahab returned, kidnapped Susan Richards and Scott Summers, and turned them into Hounds (his mutant-hunting agents). Franklin destroyed Ahab's equipment and chased him off. He then realized that his presence would eventually drain the life out of Rachel and the younger Franklin; he voluntarily gave up his own life force to save them.[5] 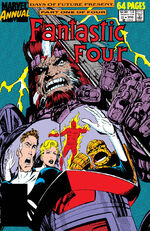 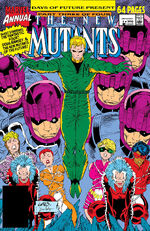 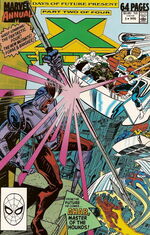 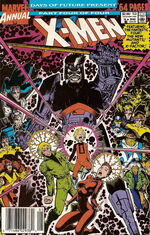 Retrieved from "https://marvel.fandom.com/wiki/Days_of_Future_Present?oldid=5633918"
Community content is available under CC-BY-SA unless otherwise noted.