Dead No More: The Clone Conspiracy 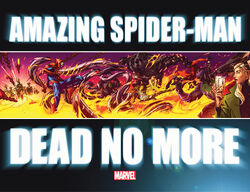 J. Jonah Jameson's father Jay is hospitalized after collapsing. With his health deteriorating by the hour, Peter Parker and Jameson are approached by Dr. Rita Clarkson, a representative of New U Technologies who offers them the chance to save Jay's life using an expensive cutting-edge experimental procedure that consists of the use of cloned organs and body parts.

While initially reluctant, Jonah agrees to use New U's procedure on his father. In order to incentivize Jameson to promote the company, Clarkson reunites Jameson with his fomerly deceased wife Marla, to show him the extents New U can reach.

Meanwhile, Peter is forced to resort to New U to save the life of a Parker Industries worker named Jerry Salteres following a fatal accident. While the surgery appears to be miraculous and Salteres's health is restored, Jeremy's presence following the procedure triggers Peter's Spider-Sense.[5]

In order to investigate New U, Parker sends his ally the Prowler to their headquarters in San Francisco. The Prowler discovers the company is the front for the Jackal's new master plan, and witnesses the birth of a new Electro. However, before being able to report to Peter, the Prowler is fried and killed by Electro. The Jackal uses his procedure to bring him back to life, and even turn him to his side.[6]

Several months before these events, Otto Octavius created a copy of his consciousness, due to the events of the battle against the Inheritors having given him the knowledge that he was going to die at some point in his future. A hundred days later, the copy of Octavius's mind awoke inside one of his former gauntlets. Unable to usurp Peter Parker's body once again, he hosted his mind within the Living Brain. After months of pretending to be a simple robot, Otto lashed out at Peter and Anna Maria Marconi when he learned how his original self met his end. The gauntlet ejected from the Living Brain as it self destructed, containing Otto's mind once again, and it set out to regain his original body, using New U's technology as a means to do that.[7]

With Jay's health having taken a turn for the worse, Peter has to endure Jonah's and May's concerns for his extreme skepticism for using New U, with his secret identity preventing him from informing them of the real reason he doubts them. Peter remains adamant of sticking to the conventional procedure, and Jay has sided with him.

Peter's superheroic endeavors prevent him from accompanying May and Jonah as Jay's health reaches critical status and he undergoes conventional surgery. To make matters worse, this is not enough and Jay passes away.[8]

After attending Jay's funeral, Peter decides to pay Jerry Salteres a visit in order to investigate why his Spider-Sense went off in Jerry's presence. When they reach his house, his wife Emma reveals that New U had mysteriously taken Jerry away after he had accidentally forgotten to take a post-procedure daily pill prescribed by New U and his health decayed.

As Spider-Man, Peter inflitrates the New U Headquarters and tries to locate Jerry using a microscopic Spider-Tracer he had tagged him with at the hospital once his Spider-Sense had gone off. Spider-Man delves deep into the laboratory and discovers several stasis tubes, with one of them apparently containing nothing but Jerry's nervous system, completely stripped from his body, and alive. Spider-Man is soon sighted by one of Miles Warren's clones/assistants, who calls the Rhino and Electro for help. After dispatching the two villains, Spider-Man continues to pursue Miles, only to find Gwen Stacy herself behind a closed door. The shock of Gwen's presence prevents Spidey from reacting to his Spider-Sense on time, and he's sucker-punched by the returned Doctor Octopus.[9]

The Jackal puts a halt on the fight, instead offers Spider-Man to be toured around New U, and tries to convince the web-slinger that he's trying to do good. He soon reveals that he was brought back every villain that had died on Spider-Man's watch, and they're being reformed by those allies of the hero that had also perished. After the Jackal explains that he's trying to convince Peter to work for him, George Stacy points his gun at Gwen, claiming to have noticed she is not his real daughter. She reveals herself to actually be the Gwen Stacy of Earth-65, Spider-Woman. After making their way through the army of Spider-Man's villains and allies, Spider-Man and Gwen escape. It's revealed that the real Gwen is being held captive by Scarlet Spider, who is working together with Earth-65's Gwen to prevent a dire future they witnessed in alternate universes from happening, one where Peter Parker's alliance with the Jackal brought the world's end through the Carrion Virus.[10]

Scarlet Spider had brought Gwen to Horizon University so they could provide her with the New U pills they were analysing to prevent her from suffering cell degeneration (what would eventually develop into the Carrion Virus). They try to contact the authorities regarding New U, but the police chief had secrelty undergone their procedure, and tips them off about their location. Rhino and Electro attack Horizon University, retrieving Gwen and kidnapping Scarlet Spider and Anna Maria in the process.

After having escaped from New U, Spider-Man and Spider-Woman try to assist Scarlet Spider to no avail, as they arrive too late. The Kingpin suddenly appears on the scene, having being investigated the Jackal ever since he had tried to convince to join his cause by bringing back his wife Vanessa, and provides Spider-Man with information on a meeting between Jackal and the organization that has been exhumating corpses for him to reanimate.

Spider-Man travels to the scene and confronts the Jackal as he's in the middle of a transaction. After the webslinger notices that his foe is stronger and faster than ever, the Jackal decides to reveal his true identity: not that of Miles Warren, but instead Ben Reilly. Ben further attempts to convince Peter to join his cause and use Parker Industries' resources to go worldwide by proposing to reanimate the body he has just been transacted, the corpse of his beloved Uncle Ben.[11]

In the Jackal's laboratory, Doctor Octopus is studying Kaine to perfect his "Proto Clone." Anna Maria is brought into the lab to help him and becomes uncomfortable when Doctor Octopus starts appealing towards his love interest. Otto then realizes that the clones inside the bunkers have started breaking down at slower rates, so he figures that they should isolate the frequency which causes the cellular breakdown. Meanwhile, Spider-Woman of Earth-65 follows her Earth-616 counterpart into the South New U Technologies facility to find Kaine.

After Ben and Peter's confrontation, Ben starts driving Spider-Man to the New U Technologies facility with Uncle Ben's corpse and explains to Peter that he was able to make his company and vision come to life through emotionally blackmailing the higher-ups of society. He then shows Peter the "Haven," a section of the facility set up like a normal neighborhood where Peter sees all of his resurrected friends and enemies, with the latest ones being Sally Avril, Ned Leeds, and Nick Katzenberg. He apologizes to the Stacys and Marla Jameson tells Spider-Man that she was honored by his vow not to let other people die.

After J. Jonah Jameson heads upstairs to promote the New U Technologies on television, Spider-Man confronts the Jackal and tells him that the reason he hasn't brought Uncle Ben back yet was because Peter knew Uncle Ben would tell the Jackal that he's wrong and that he's using his power without responsibility. It prompts the Jackal to order Spider-Man's rogues to kill him, planning to replace Peter when he's dead. Prowler assists Spider-Man in battling the villains as the Jackal heads back to his laboratory.

At the laboratory, Doctor Octopus claims a "breakthrough" by reversing the responsible frequency for the breaking down of the cells. Anna Maria reveals she knows how to stop the decaying process on the clones and Jackal offers her the "Proto Clone" body in exchange for the formula. Doctor Octopus takes offense to Jackal's comments on Maria's dwarfism and attacks his boss. Spider-Woman of Earth-65 uses the opportunity to try and free Kaine, but is attacked by Electro. Doctor Octopus pulls a switch which activates the frequency to kick the Carrion Virus in all of the clones, and causes them to start rapidly decaying. Spider-Woman escapes with Kaine as the Carrion Virus starts spreading, which causes Anna to also be affected. Spider-Man tries to appeal to Ben, stating they are still good guys, but the Jackal ignores him and takes over Jameson's broadcast to tell the world that they will all die and be reborn.[12]

People who took the New U treatment from all over the world start to break down and turn into Carrions, infecting other people as well. Gwen Stacy directs Spider-Man to the Jackal's main lab while Prowler and Jean DeWolff contain the crowd of villains attempting to break out. Captain Stacy dies in Gwen's arms, making her promise to help and take care of Peter. At the Jackal's lab, Jackal throws Kaine out of a window, forcing Spider-Woman to leave the scene to catch him, with Electro on her tail, reducing the participants of the brawl to Otto and Reilly.

At a corridor leading to Jackal's lab, Gwen locks Spider-Man in the other side of the passageway, deciding to remain behind and use her last minutes to fend off the Green Goblin, Hobgoblin and Jack O'Lantern, the only three villains who had managed to follow them, in order to buy Spider-Man time.

Back at Jackal's lab, Anna manages to find the reverse frequence necessary to save everyone from decay. Spider-Man arrives and escapes with her to find a way to broadcast the signal globally, while Doc Ock mantains the Jackal occupied. They get to the Fact Channel station on top of the facility, where Peter planned to use its equipment to broadcast the signal. However, with her last breathes, Marla Jameson had shut everything down. Peter decides to move to Plan B, and uses the Webware's emergency system to broadcast the frequecy through every Webware device in the world, even if it would cost them their integrity afterwards.

The plan works, and every Carrion who hadn't broken down is reverted back to normal, with the exception of the Jackal and Doctor Octopus. Having decided to kill Reilly, Doc Ock destroyed the Webware in his possession that would've saved both of them. When Peter and Anna Maria return to Ben's lab, they find Jackal's mask, Otto's tentacles, and a pile of dust in the ground. However, Anna notices that a stasis tube that previously contained a prototype body of New U's ultimate clone template was open and had been emptied.

In the end, some of the villains dissolved while others remained alive. The hero and his allies are approached by Dr. Rita Clarkson, and shows them a sub-basement in the complex where New U kept in stasis all of their patients in order to help with the cloning process. Some of them were even cured of their conditions by New U's procedures, including the original Prowler and Jerry Salteres.[13]

Retrieved from "https://marvel.fandom.com/wiki/Dead_No_More:_The_Clone_Conspiracy?oldid=5590298"
Community content is available under CC-BY-SA unless otherwise noted.