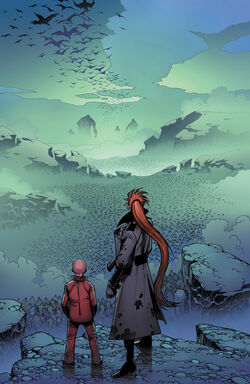 When Baron Jamie Braddock of Higher Avalon was exiled to the Shield, he decided to embrace his fate and directly enter into contact with the Deadlands, fighting its inhabitants until his death.[1] The Deadlands were later trespassed when a Megalodon, which attacked Arcadia, was thrown by Ms. America into this territory.[2]

During her shift, Commander Elsa Bloodstone was teleported two-hundred miles south of the Shield by a zombified Red Terror. She encountered a young amnesic child and set out to return to the Shield, even though the child claimed she had a hunch they should go South. After walking a few distance North, Bloodstone discovered an endless horde of zombies trying to get to the Shield, and took into consideration the child's proposal to go South to explore the unknown.[3]

As they ventured through the Deadlands, Bloodstone and the child were saved from some zombies by Ranger Worthington, who was surveying the area when he found them. Elsa commanded him to take the child to the Shield, and as he left his tracker with her and took the child away, Elsa spotted the person who had been stalking her since she entered this domain using her binoculars. When she put it back in her pocket, she accidentally let the tracker fall on the ground and discovered it was fake, realizing that she was double-crossed by a shape-shifter. She then went to where the shape-shifter headed, only to discover that the child had already been bitten by her. As she was ready to leave, Elsa found Deadpool, whose brain was being used by Mystique to feed herself and her small horde of zombies.[4]

Deadpool showed to Elsa that even after being bitten, the kid hadn't turned into a zombie, which surprised her as at that time she would already been turned. As Mystique was ready to decapitate the girl to eat her afterwards, Elsa began to glow, somehow being powered by her Bloodstone, and managed to save the girl. Then, she put Deadpool out of his misery by burning him to death and escaped as Mystique's horde dealt with her stalker, taking shelter in a cave far from there. In the next day, after they reached the end of the Deadlands, the child was about to answer to Elsa why she wasn't infected when Elsa's stalker showed up. At first, she thought it was the Red Terror again, but he revealed himself to be the zombified version of the man she hated the most, her father, Ulysses Bloodstone.[5]

When Mystique's horde showed up to retrieve the girl and take revenge on her, Elsa quickly decapitated her father's analog and attacked the incoming zombies, but was overwhelmed by them. However, she was saved by Ulysses, who used the power of the Bloodstones attached to his body to kill them and heal himself. He revealed he had been hunting every duplicate of his line, using the Bloodstone's power to attract them to the Deadlands, in order to take their Bloodstones, which controlled his hunger.

Elsa was attacked by Ulysses, who bit her arm off and started to absorb her stone's power, which wasn't contained inside the stone but inside the girl Elsa had saved. While her life was drained from her, Elsa finally realized the girl was herself, the manifestation her Bloodstone created of the childhood stolen from her by her father. She confronted Ulysses, buying enough time for her child self reach her weapon and deliver a powerful blow on him, ripping the Bloodstones off his body.

Elsa quickly devoured the Bloodstones and used their power to merge with her child self, as well as destroying the remaining zombies of Mystique's horde, who were watching from afar. Later, she used the Bloodstones' power to heal herself and resurrect her father's analog. Elsa decided to give him a second chance and set off with him to explore the world.[6]

With the legend of the survival of the Red Skull, who had unsuccessfully led an uprising against God Emperor Doom and seemingly died when sent over the Shield as his punishment, spreading and wreaking havoc through all Battleworld, Doom ordered Sheriff Strange to assemble a group of criminals to be sent over the Shield to try and find any proof of Shmidt's death. Gathered by Crossbones, who had escaped the Deadlands alive, the group formed by Electro, Magneto, Moonstone, Jack O'Lantern, Lady Deathstrike and the Winter Soldier entered the Deadlands through a tunnel in the Shield.

As soon as they entered the domain, they were instantly attacked and mostly killed by a zombie horde. Magneto, the only member of the team remaining alive, was saved by none other than the Red Skull himself.[7] The Red Skull took Magneto to his secret hideout and told him about his plans of destroying the Shield using his powers over magnetism. At first, it enraged Magneto, but he couldn't kill him because of the Inhibitor Collar he was forced to use, as well as the Red Skull being stronger than him, so he agreed to help.

With his face burnt and now resembling his enemy, Magneto confronted the Red Skull, willing to deliver his head to Doom and get his freedom as promised by Crossbones earlier, but Shmidt neutralized his powers by putting the inhibitor collar back around his neck. The Red Skull then explained to him that he needed a distraction to make his escape, and that being the lone survivor of this incident would only add to his myth, making his return even more meaningful. After a brief fight, the Red Skull left Magneto to die against the hordes of zombies and escaped the north of Battleworld through the tunnel used by the team Magneto once made part of to enter the Deadlands. However, as he boasted about being free again, Shmidt was shot in the head by Crossbones, ending his life as well as his myth. With the Red Skull's severed head in his possession, Crossbones went deliver it to Doom.[9]

Like this? Let us know!
Retrieved from "https://marvel.fandom.com/wiki/Deadlands_(Battleworld)?oldid=5888784"
Community content is available under CC-BY-SA unless otherwise noted.