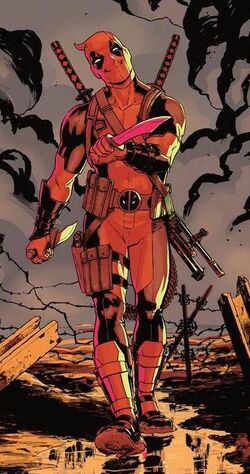 You may be wondering, why the red suit? Well, that's so bad guys can't see me bleed.

Deadpool wears a red and black full body tactical suit in order to hide the cancer scars that cover his entire body.[1] It was designed by his friend Weasel, a weapons designer and arms dealer who designed most of Deadpool's equipment.[2]

The Suit houses a number of pockets containing multiple types of guns, grenades, sai, and knives. The suit also has two holsters on his back to house his katanas.[3]

Deadpool also used to wear a teleporter on his wrist.[4]

Like this? Let us know!
Retrieved from "https://marvel.fandom.com/wiki/Deadpool%27s_Suit?oldid=6448427"
Community content is available under CC-BY-SA unless otherwise noted.