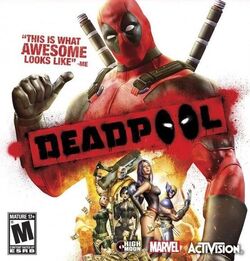 Deadpool was sitting on his couch, listening to the different calls his answering machine has received. One was from Wolverine, demanding Wade to stop asking him to pilot the Blackbird, another one was from Domino, who told Wade about a good contract but that she wouldn't accept the "other" thing Wade texted her about. The final message was from Peter Della Penna from High Moon Studios, who wanted to inform Deadpool that his proposal for a video game starring himself had been rejected (as the proposal was nonsense written in crayon). Deadpool triggers explosives he had hidden in the video game developer's headquarters, forcing Peter to immediately change his mind and accept Deadpool's proposal, stating that the script for the game was going to be delivered to him as soon as possible. Deadpool indignantly stated that his game didn't need a script, and he started his adventure (being inside his own game) without reading it (although the inner voice he calls "The Writer" suggested he read it).

He started the tutorial in the sewers where he crossed them while teaching "the player" how to play. During the tutorial he inflated a bouncy castle for an unknown reason and later proceeded to make an entry in a television studio by blowing up the bathroom's floor with explosives. The reason for his visit was to kill corrupt media mogul Chance White (though he does not know why, due to destroying the script). He made his way to Chance White's penthouse after facing the mogul's bodyguards and entered his panic room by exploding the door using 20 ounces of explosives. He proceeded to punch White and tackled him out of a window, safely landing in the bouncy castle after entering the sewers by a narrow inlet.

Wade was immediately called by Peter, because Deadpool blew the game's budget in the process to get Chance White. When he was ignoring Peter's call, the Marauders sneak up on him and took White. Deadpool realized White was taken from him and decided to chase the Marauders in the sewers, facing and killing Arclight in the process. After Vertigo used her powers to make Wade dizzy, he was thrown to the current by her. Deadpool surfed the pipes, at the end of which conveniently was where the Marauders had White. Wade quitely heard as Chance informed to the Marauder's leader Mr. Sinister that his satellites were under the supervillain's control. Sinister killed Chance as he was no longer useful, which angered Deadpool for making him lose his money. The mercenary abruptly confronted Mr. Sinister, killing Vertigo and quickly subduing Blockbuster in the process; he wants to take out his anger on him. The villain gave no importance to Deadpool's demand, telekinetically dismembered Wade, and escaped with Blockbuster, announcing that Genosha awaited them.

The X-Men arrived to the scene and rearmed Deadpool. They tried to explain to him what did Sinister want, but Deadpool's daydream about the X-Women Domino and Psylocke distracted him. Wolverine told him they could use his help in this mission, for which Deadpool asked to be allowed to fly the Blackbird, Wilson was finally permitted to pilot the jet, after Logan didn't let him numerous times in the past.

After fooling around for some time, Wade and the X-Men finally arrived to Genosha, crashing the Blackbird in the process. Deadpool checked on his allies, who seemingly died in the "landing", and realized he was on his own. Wade had caught the attention of Sinister's army of clones with the crash. After killing many of Sinister's forces, Cable arrived from the future in order to bring Wilson a "dire warning." Cable's speech bored Deadpool, who didn't pay attention and decided to blow up his head with a gun in order to "make it stop." After waking up, Deadpool found a note stabbed in his chest with a note from Cable, in which he asked him to go to the north end of the city, in order to meet a large breasted naked woman who claimed to be Deadpool's greatest fan. Although one of his inner voices told him not to fall for that, Deadpool still decided to take a chance to see if it was true.

When he arrived at his destination, Wade's delusions made him believe Cable was his fan, although he immediately came to his senses. Summers told Deadpool they needed to go to Magneto's old citadel, and they shouldn't worry about a security tower near them where Sinister was using Chance's satellites to broadcast a signal to keep the X-Men out cold. Without letting Cable explain why they shouldn't bother about that tower and decided to make his way to the top of it. Wade opened a cockpit and found Mr. Sinister stuck in a chair, Wilson proceeded to mess up with his equipment, causing the tower to fall and crush Mr. Sinister. Having killed Sinister, Deadpool demanded the credits to roll out. But he was stopped by Cable, who angrily told him that Mr. Sinister was just a clone of the original Sinister.

Cable managed to convince Wade stopping Sinister's plan was more important, as if he wasn't stopped, he would kill Samantha, a lady who made the tacos Wade liked the most, and the rest of the world as well. Deadpool asked him if they could team-up to stop Sinister, but Summers told him he needed to go back to the future. The location of Magneto's citadel was way too far, and getting there would take days by walking. Wade managed to convince Cable to reprogram a Sentinel boot for him. After finding two essential parts for his plan, Cable built Deadpool a boot which he used to travel the island by giant leaps, killing numerous enemies in the process, until he managed to make it perform a stable flight.

After realizing he might have used way too many expensive set-ups in that level, Deadpool wondered if Peter was going to be okay with the budget. Stating that they didn't need budget, Deadpool proceeded to perform the next cutscene with papercraft, in which he accidentally crashed in mid-air with Rogue, whose flying abilities were being nullified by Sinister. They crashed in an old Genoshan prison, where Rogue was captured by Blockbuster. From the fall, Deadpool lost his arm and got his neck twisted. He had to retrieve his limb from his dog, Mr. Shuggums, who mysteriously appeared on the scene. After reattaching his arm, Deadpool turned his neck to the right place and started looking for Rogue, hoping that after saving her, he would get a kiss.

During his search, Deadpool got High Moon Studios to upgrade his teleport ability. Mr. Shuggums led Deadpool to where Rogue was, an arena where she was going to be executed by Blockbuster in the presence of Sinister. Deadpool decided to sneakily set some bombs around the place to impress Rogue for when he rescued her, and decided to stealth kill Mr. Sinister, who was in his loge. Deadpool beheaded the villain and posted the photo with his head in the social network Twert. Cable contacted him and told him that he had killed another clone, and that while he wasted his time, Rogue was being brought to the arena. Deadpool went there, managed to kill Blockbuster and saved Rogue, activating the bombs to make his rescue astonishing. Rogue needed to heal, and Deadpool decided to give her his healing factor through skin contact, by kissing her. Deadpool's powers, abilities and even his inner voices were absorbed by Rogue, who recovered while Deadpool fell unconscious. Rogue took Wade's mask and started killing Sinister's goons who came to fight her, the inner voices specifically appreciated the fact of being inside a woman. Wade woke up, still disoriented, and tried to help Rogue by launching a granade to his enemies. The projectile was caught by Mr. Shuggums, who wanted to return it to Wade as it was a toy, exploding.

The ground below Deadpool collapsed and Wade got his legs severed, falling to a hidden catacomb. Deadpool got hung in a part of the ceiling by his intestine, while his legs ended up in a mine wagon. The merc cut his intestine in order to get free, and fell on the head of one of Sinister's goons, making him look like a four armed monster which terrorized his fellow thugs. During the confusion, Wade was hurled to the wagon where his legs were and fell unconscious. In his dream he was visited by Death, who asked him his help to retrieve the souls of some mutants whose corpses were being profaned by Sinister, who was harvesting their DNA in his attempt to perfect the world. Wade got his legs reattached and begun his quest to free those souls.

Wade encountered Cable once more deep in the catacombs, where he handled Sinister's army of clones while Deadpool went through different parts of the caverns in order to retrieve the souls for Death. After this task was accomplished, Death brought Wilson back to the surface, where he resumed his mission to stop Sinister.

Wolverine found Deadpool while the mercenary was getting some material for a surprise to "the player". Logan demanded Wilson to focus and told him to get moving to the citadel. Wade raced the X-Men across Genosha, and found Mr. Shuggums alive in the modified Sentinel boot, but it took flight before Deadpool could do anything. Deadpool got to the location where the surprise for "the player" was, a custom flying bike with which he would arrive to Magneto's citadel much faster than the X-Men. With an elaborated "domino effect" with objects, Deadpool pointed the X-Men where to go.

Deadpool arrived near the citadel and quickly headed there. After getting there, he battled clones of the Marauders, Arclight, Vertigo and Blockbuster, until numerous clones of Sinister showed up in order to face him. After the clones were killed, the X-Men arrived to the citadel. The real Sinister finally showed up angry with Deadpool's interference, quickly subduing the X-Men using concussive blasts. Sinister started insulting Deadpool, without noticing he was standing right in a giant "X" the mercenary had painted before the final battle. Wade asked the player to push a button in order to execute his super-awesome plan. Deadpool proceeded to punch Sinister in his crotch, and used the Sentinel boot to crush him when he was reeling from the pain, finally klling him. The X-Men recovered and Cable arrived from the future in order to congratulate his friend. After reappering on top of the boot, Deadpool demanded the credits to roll out.

Later, Deadpool was in his own apartment, having finished playing the game, stating that it was awesome. He was called by Peter, who congratulated the merc and told him the game didn't actually exceed the budget, for what Deadpool filled the credits with explosions.

Like this? Let us know!
Retrieved from "https://marvel.fandom.com/wiki/Deadpool_(video_game)?oldid=6486449"
Community content is available under CC-BY-SA unless otherwise noted.