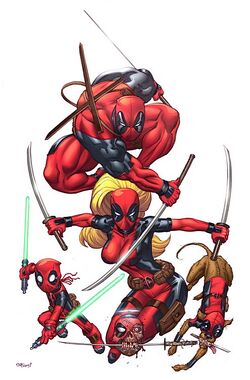 Show off the new bling, people! WE ARE THE DEADPOOL CORPS.

The Deadpool Corps is a team of Deadpools from alternate universes. The Corps was founded by Earth-616's Deadpool after he was chosen by the Contemplator in stopping a cosmic entity known as the Awareness that devours the Multiverse's consciousness. In truth, the Deadpool Corps's real power to stop the entity is their unique mind that ultimately made them absolutely immune to the entity.

The Deadpool Corps came into conflict with the Champion, who and along with the Grandmaster did not see them as worthy heroes and decided to test them. Fortunately, the Corps proved their worth by tricking the Champion into becoming two-times stranded on a planet. With help from the Broken Blade, the Corps annihilated the entity who turns out to be a little alien that was the lone survivor of his species after the Big Bang.[1]

The Deadpool Corps joined forces once more after Dreadpool formed an evil version of the Corps and started a multiversal massacre with the objective of killing every alternate version of himself. They managed to warn Deadpool and tried to bring him with the rest of the resistance in an alternate universe, but for their surprise, they were found and killed. Earth-616's Deadpool and the remaining Deadpools fought a group of the Evil Deadpool Corps led by Evil Deadpool, who revealed their appearance as a suicide mission, as they had brought with themselves Galactipool.[2]

Like this? Let us know!
Retrieved from "https://marvel.fandom.com/wiki/Deadpool_Corps_(Multiverse)?oldid=6128682"
Community content is available under CC-BY-SA unless otherwise noted.