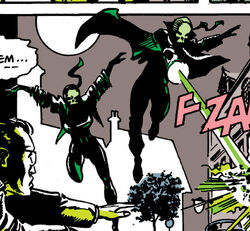 According to themselves, the Gnobians were a specie of aliens discovered by Baron von Strucker and Wilhelm Schmidt near the village of Gruenstadt in Germany, 1944.[3] They helped Strucker building his future Hydra empire by giving him their advanced technology, which eventually led to the creations of the Life-Model Decoys and the Deltites.[3]

It was eventually revealed that the events of Gruenstadt have never happened and that the Gnobians were advanced LMDs, unaware of their real origins and possibly had implanted memories, created by Arnim Zola under Baron Strucker's orders.[4]

Like this? Let us know!
Retrieved from "https://marvel.fandom.com/wiki/Death%27s_Head_Squadron_(Earth-616)?oldid=6505367"
Community content is available under CC-BY-SA unless otherwise noted.