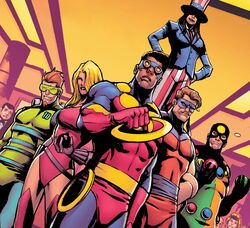 The Death-Throws were the brainchild of Charles Last, the Ringleader, a criminal juggler. When he met brothers and jugglers Elton and Alvin Healey, he recruited both of them for a new gang of costumed criminals: The Death-Throws, under the leadership of Last, would be at the same time costumed mercenaries and jugglers. They would take advantage of their juggling skills and use throwing weapons. Elton adopted the name of Oddball due to his looney nature, and his tenpin-throwing brother would be known as the Tenpin. The fourth member of the team was Knicknack, recruited under undisclosed circumstances.[1][2]

Oddball's previous boss Crossfire contacted the Death-Throws from jail. He wanted the jugglers to release him, and agreed to pay them when he was freed. The Ringleader accepted the deal, and the other Death-Throws worked together to free Crossfire. However, once they had taken Crossfire to their own HQ, they discovered that Crossfire was broke! His assets had been impounded and he had lost any useful link with Cross Technologies. The Death-Throws decided to use Crossfire as a bait to attract Hawkeye and Captain America to a trap, but those two Avengers defeated all of the Death-Throws. Tenpin and his partners went to jail.[1]

Although Oddball was killed in Madripoor, and Bombshell temporarily left the team, the Death-Throws continued with their usual crime contracts. They even went to London with their old boss, Crossfire, as part of a R.A.I.D. terrorist attack on the city. They were tasked with causing destruction and death on Tower Bridge, but were defeated by Union Jack and Sabra.[4]

Soon after the World War Hate, the Death-Throws attempted to rob the Big Top Casino in Las Vegas, but their plan was thwarted by Loki.[5]

Transportation: Ad hoc
Weapons: Each of the members uses own weapons, although they commonly juggle weapons to another teammate

Retrieved from "https://marvel.fandom.com/wiki/Death-Throws_(Earth-616)?oldid=5546153"
Community content is available under CC-BY-SA unless otherwise noted.