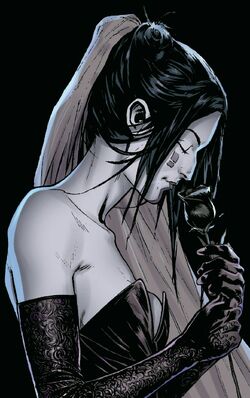 After Thanos killed almost every living thing in the known galaxy[1] and became the king of what had remained in his wake,[2] Death disapperead.[1] King Thanos knew she would only return when he was the only living thing remaining,[3] so he gave a piece of the Time Stone to his servant, the Rider, and tasked him with the mission of going back in time to drag his past self to the future[4] for when that moment came, only he could kill King Thanos and thus reunite him with Death.[3]

After the brutal death of the Fallen One,[5] the one being who had eluded King Thanos,[1] Death returned[5] and watched as the Twin Titans fought to the death; however, the younger Thanos ceased his attacks for deeming his older self a failure, and used the broken Time Stone to return to the past and erase King Thanos' future from existence by not becoming him. As reality started to fade into nothingness, King Thanos asked Death what did his younger self do to rid of him, to which she replied that what he did was to win.[3]

Seemingly those of the Death of Earth-616.

Like this? Let us know!
Retrieved from "https://marvel.fandom.com/wiki/Death_(Earth-TRN666)?oldid=6098242"
Community content is available under CC-BY-SA unless otherwise noted.