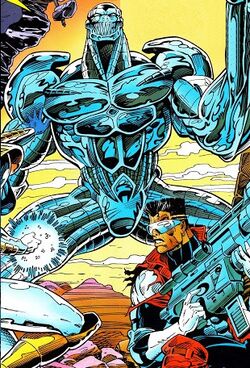 When Death Wreck return to Dr. Necker, she used a time traveling belt to send him back in time in order to further research why Minion when wrong. However Death Wreck was send to Earth-9939 where he was attack be Charnel's metallic spawns, teleporting back to Earth-8410 he brought back a piece of this creatures. Dr. Neck study the fragment, calling it Prometheum, with it notice that she could create a much stronger robot with it, her goal to protect her from A.I.M. who would retaliate for her failure. However upon turning the robot on the creature's will overpower it programming and sought to understand it origin. He took a time belt and was ready to use it but Dr. Necker call for Death Wreck stop it, but both vanish in time vortex. Death Metal was left unconscious on Earth-9939.[1] His unconscious body was found by Doctor Octopus who brought to his master Dr. Doom, during a short struggle between Kingpin who claim Doctor Octopus was tricking him. However the struggle cause the android to awaken and thirsty for blood he killed all present. He next venture outside and found himself face to face with Ghost Rider, and during short struggle which left Ghost Rider defeated, his memories flooded back, Charnel was his father.[2]

Death Metal's body is composed of Prometheum, an eldritch metal giving him the following abilities:

Any assimilated from his targets.

Death Metal is prone to berserk rage that leave him in state of perpetual killing until someone can summon his inner goodness.[3]

Like this? Let us know!
Retrieved from "https://marvel.fandom.com/wiki/Death_Metal_(Earth-8410)?oldid=6433322"
Community content is available under CC-BY-SA unless otherwise noted.