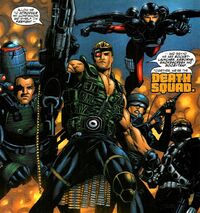 The Death Squad was hired to kill Tony Stark but they were defeated by Iron Man and escaped.[1]

They fought Iron Man a second time along with Nitro and Whiplash but with the help of S.H.I.E.L.D. agent Carlisle he defeated them. After they escaped, Iron Man tracked them to Count Nefaria's castle and fought the villains. During the fight an ionic shock erupted from the floor, apparently killing the Squad and damaging Iron Man's armor. Iron Man recovered and defeated Nefaria but the Death Squad was not seen again.[2]

Nefaria wasn't the leader by employer.

Retrieved from "https://marvel.fandom.com/wiki/Death_Squad_(Count_Nefaria)_(Earth-616)?oldid=4876121"
Community content is available under CC-BY-SA unless otherwise noted.