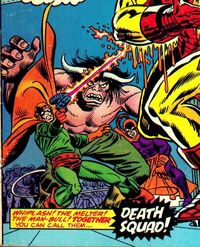 The Melter recruited Whiplash and Man-Bull in order to destroy Iron Man. They planned to pull off a heist to attract the attention of Iron Man. Before they could do so they were approached by the Black Lama who offered them the Golden Globe of Power if they defeated Iron Man. The Death Squad then assaulted a comic convention that Iron Man was attending and began fighting him. Black Lama then appeared and mesmerised the crowd into attacking Iron Man. In the ensuing chaos Black Lama snuck up behind Iron Man with a scimitar, but the Melter shoots him, wanting the honor of killing Iron Man for himself. Iron Man overcame his adversaries, the Death Squad was arrested, and Black Lama fled.[1]

Retrieved from "https://marvel.fandom.com/wiki/Death_Squad_(Melter)_(Earth-616)?oldid=5546145"
Community content is available under CC-BY-SA unless otherwise noted.