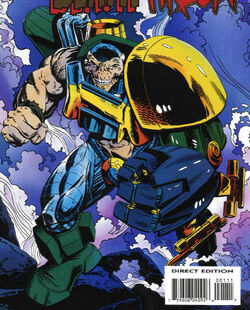 In the year 2018, an unknown vagabond was drinking by a trashcan fire when a monstrous Minion-Prototype scared him before Dr. Necker shot him in order to use his brain to be transplanted into the Minion-Prototype's body. Dr. Necker next saw him two years later while she was employed be Omni Corporation. She quickly went about fixing him and exploring the idea of time travel. She sent him to Earth-9939 where he battled Charnel's liquid metal spawns. Upon his return to Earth-8410, he accidentally brought a piece of one of these creatures back. With this fragment, Dr. Necker created a new android name Death Metal. However, her new creation soon turned on her, and Death Wreck was summoned to deal with the problem. However, he was sucked into the time vortex and vanished.[1]

When he was next seen, Death Wreck was in Earth-9939 before he was encountered by a blind Alicia Masters-Grimm, who befriended him and returned him to Avengers Mansion where Jarvis and Lord Stark awaited. Lord Stark confronted him for drinking the little wine they had, wanting to leave because he was not wanted. Death Wreck insulted Lord Stark which cause a massive fight. Jarvis called upon an aged Black Widow and severely impaired Ben Grimm whose body had been fused together and thanks to power armor was able to walk. However, Stark stopped the argument because he heard of Death Wreck mention of him being a time traveling. Stark then used a special machine to summon all who genetic trace was similar to him, bringing Death's Head Minion.[2]

Like this? Let us know!
Retrieved from "https://marvel.fandom.com/wiki/Death_Wreck_(Minion)_(Earth-8410)?oldid=6433323"
Community content is available under CC-BY-SA unless otherwise noted.