The Death of Captain America 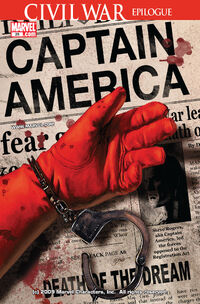 The Death of the Dream

The Burden of Dreams

After receiving a posthumous letter from Steve Rogers telling him to continue the Captain America legacy and look out for Bucky, Stark shows Winter Soldier the letter and proposes to make him the new Captain America. Bucky agrees on the condition that he can be an independent agent who doesn't answer to Stark, S.H.I.E.L.D., or the Initiative. The Red Skull fakes the death of Aleksander Lukin, whose mind he inhabits and begins using Kronas Corporation's vast holdings to economically cripple the United States, before having S.H.I.E.L.D. agents brainwashed by Doctor Faustus open fire on crowds of protesters in front of the White House. The Red Skull continues his assault by engineering a riot by placing Kronas security troops and drugged water in a protest on the Lincoln Monument. The Skull also kidnaps Sharon Carter, who now knows that she is pregnant with Steve Rogers' child.

The Man Who Bought America

All of the Red Skull's actions benefit his puppet politician, Gordon Wright who quickly becomes a popular third party Presidential candidate. Once elected, Wright will lead the country directly into a police state secretly controlled by the Red Skull.

The Skull also plans to transfer his consciousness into Sharon's unborn child, apparently sired by Steve Rogers himself and potentially having inherited his Project Rebirth enhancements.

Both schemes fail because of the impatience and incompetence of the Skull's daughter — her near-fatal attack on Sharon Carter causes her to lose the baby, and she intentionally botches her pseudo-assassination of Gordon Wright by attempting to kill him for real. Faustus has surreptitiously tampered with Sharon's programming, she is able to rebel, and before escaping shoots Lukin to death. Black Widow and the Falcon lead a S.H.I.E.L.D. raid at the Red Skull's compound. Most of the Skull's agents are captured. The Red Skull escapes however; his consciousness is transferred from Lukin to one of the robot bodies used by Arnim Zola.