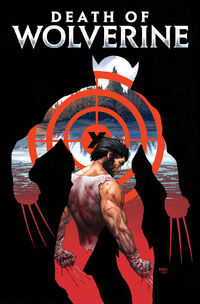 Logan had a reunion with Mister Fantastic, who explained to him that his entire physical structure is based on the fact that he could heal himself and that now only using his claws can be fatal. He assured him he can reactivate his healing factor but will need time and asked him not to fight until he can figure it out. Traveling to an island in British Columbia, Canada, he was attacked again and again by A.I.M. agents, ninjas and other mercs and assassins who came for a bounty in his head. They took most of each other out competing for the bounty and he killed the rest. He returned to main land to a bar and left a bartender with a note for whomever else came looking for him before heading back to the island. Next came Nuke and several of his mercenaries. One of them was sent to the port, which was set to explode. Wolverine sunk the boat from below and killed the other mercenaries as they tried to escape to the coast, leaving only Nuke alive. Nuke threw Logan against some rocks but he head-butted Nuke with his Adamantium skull until he was defeated, he told Nuke to tell everyone that he is the last one he lets live and demanding to know who put out the contract. Nuke revealed that the contract was to bring him alive and that it was put by the new queen of Madripoor, Viper.[1]

He traveled there and disguised himself as an arms dealer and offered to sell one of Viper’s men an Iron Man helmet, demanding to see Viper herself for the deal, which he agreed. She saw through his disguise and sent her guards against him, but he defeated them with little effort. He demanded answers and she revealed that a client came to her for various works and that she subcontracted the word out for him. She told him that she would tell him who the client is if Logan could beat her “pet”: Sabretooth, who was chained and captured. He explained that she got him out of prison and injected him with his venom, getting the antidote if he obeys. She claimed that she wanted one to die and that whoever wins gets what he wants. Sabretooth attacked him and slashed his eye, he set the helmet to explode and throw it to him but it didn't stop him. However, Lady Deathstrike attacked and impaled Sabretooth, allowing the Viper to escape, but Logan stopped Deathstrike from killing Sabretooth, claiming that when it happens, it won’t happen that way, she reluctantly let him go. She explained that she didn't come to capture him but that the bounty extended to her and others like them and she barely escaped from Japan from another who took the contract: Lord Ogun, and tracked him there to work together and get to the bottom of it. However, she noticed that his eye didn't regrow and realized the loss of his healing factor and claimed that he can’t help her but decided to exchange his life for her own. However, Kitty arrived and phased her arm through Deathstrike’s chest.[2]

Kitty treated Yuriko with un-phasing but Deathstrike tried to attack her and Kitty un phased her hand in Deathstrike’s and tried to kill her as she escaped. Wolverine passed out due to his wounds, but Kitty injected him with a Regen Serum, which healed him. They travelled to Japan to find Ogun. In Tokyo, he considered that it may never stop until he dies and contemplated ending it now but ultimately decided to live out the remainder of his life, however short it turned out to be. Kitty kissed him until he stopped her, she then taunted him on what happened to Jean, Mariko and Rose. He then realized she was possessed by Ogun. He revealed Kitty came looking for him at Japan and he found and possessed her. He offered to release her if he surrenders but he refused and they fought. Ogun threw him into a house, where Logan took a samurai armor and swords and battled Ogun, who started losing control of her body as she was fighting him and he taunted him that he can’t win against two of his students at the same time, forcing him off her body. Kitty insisted he go after Ogun’s new body but told him she heard the name of who put the contract while Ogun was in his head: Abraham Cornelius. He tracked Ogun to a factory and found the corpse of Cyber, which was recuperated by Ogun, melting in acid. Ogun revealed Cornelius was paying great money for Cyber's skin, some swords and other articles. Wolverine assumed he was looking for his Adamantium skeleton and Ogun told him where was Cornelius, paradise valley in Nevada. Claiming he didn"t know more, he treated Logan with stepping to the acid and killing his vessel but promised him to find another vessel, leave his current vessel unharmed and leave him alone if he simply go. He also offered him more Regen Serum but he claimed he was done living forever and told him to tell Cornelius he was coming.[3]

Logan traveled to Cornelius' facility in Paradise Valley. Using improvised fake claws, he killed the guards and broke into his lab, where he witnesses Cornelius experimenting on innocent people. He demands to know what he is doing and Cornelius claimed that he was "getting it right", claiming that he deserved to be known for something other than helping make a killer unkillable. Cornelius claimed that he was responsible for what Logan was and that his test subjects belong where he is. Revealing that all they need is the Adamantium. He told him that he had enough Adamantium and that what he needed was his healing factor for the subjects to survive, the Regen Serum being his attempt to recreate it. Cornelius told him that he could save his test subjects by giving him his healing factor, but Logan made a cut in his hand and let it bleed, showing Cornelius the lost of his healing factor. Cornelius then ordered a volunteer of his program, Sharp, who was made into a fighting machine, to kill him. During the fight, Cornelius activated his machines on the test subjects and taunted Logan, claiming that he was an animal and that Sharp was perfect. However, Logan tricked Sharp into breaking the glass protecting Cornelius, who was hurt by a shard of glass, he knocked Sharp and crushed his armor. However, Cornelius activated the Adamantium merging process and escaped. He unleashed his claws to slash the batch of liquid Adamantium before it was injected and the metal covered his entire body in the process. He injected the subjects with the Regen Serum and leave after Cornelius before the Adamantium hardened. A soldier tried to help Cornelius escape but he escaped when Logan arrived. He killed Cornelius as he asked him what he ever do beside killing, and reflected on his life before he died from suffocation from the hardening Adamantium, kneeling in the sunset, leaving Storm in charge of the X-Men and the team heartbroken.[4] 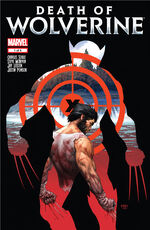 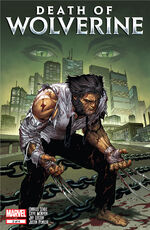 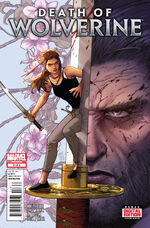 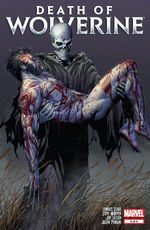 Retrieved from "https://marvel.fandom.com/wiki/Death_of_Wolverine?oldid=5628093"
Community content is available under CC-BY-SA unless otherwise noted.