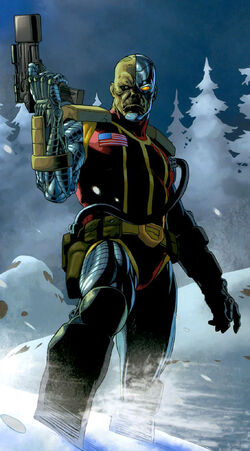 Remember this. You are what you've done, but your every action affects the future.

Deathlok Prime is a cybernetic soldier hailing from the alternate future of Earth-10511 where Roxxon has taken over the world.[1]

He joined X-Force after the Father was defeated.

During the ascension of Archangel, Deathlok was enthralled by the power of War, the final horseman. To escape its control he had to 'learn love', the effect of which being that love was the only emotion he felt.[2]

While giving a guest lecture at the Jean Grey School, he tells several of the students their possible futures and most notably predicts that Evan Sabahnur will become Apocalypse and destroy the school. He tells Logan that Evan may become their greatest savior or that he will tread upon their graves.

When not performing missions for X-Force, Deathlok would spend a lot of his time teaching at the school.

Deathlok possesses several superhuman traits due to the synthetic and cybernetic augmentation of his body.

In addition he has several unique systems of equipment that make him more deadly, he has energy claws like Wolverine and carries an alternate version of Captain America's shield.

Dual consciousness: The A.I. can cede control to the human host, who as a psychotic serial killer is happy to do many unsavory things the A.I. is not.

Like this? Let us know!
Retrieved from "https://marvel.fandom.com/wiki/Deathlok_Prime_(Earth-10511)?oldid=5491560"
Community content is available under CC-BY-SA unless otherwise noted.