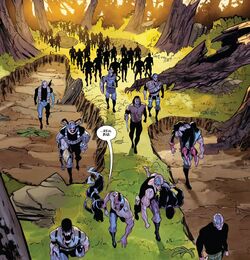 The Deathloks were an army of cyborgs created by M.O.D.O.K. when he set out to capture Ultimo after awakening him from a slumber under the island of Lingares. After causing Ultimo's reactivation and failing to stop him on his own,[1] M.O.D.O.K. approached the locals of Lingares under the pretense of offering them help in stopping the giant robot. The initial batch of Deathloks were made using fallen countrymen.[2] Due to the ongoing robot revolution, the Deathloks decided to rebel against M.O.D.O.K.'s control and but continued confronting Ultimo, albeit to destroy him and prevent him from falling under M.O.D.O.K.'s control.[1] When the Deathloks couldn't stop Ultimo, they turned to abducting living people to turn them into their own. [2]

Force Works was deployed in Lingares to investigate a nuclear explosion cuased by M.O.D.O.K. in his attempts to contain Ultimo. Shortly after they reached the island, they were swarmed and overwhelmed by the Deathloks.[3] They were defeated and taken prisoners, and while War Machine was taken to be transformed into a Deathlok, the rest of the team managed to break free and help the other prisoners escape. During this scuffle, the Deathloks confronted both Ultimo and Force Works. After M.O.D.O.K. liberated War Machine, he defeated the Deathloks surrounding his teammates.[1]

M.O.D.O.K. and Force Works joined forces and engaged Ultimo, resulting in his defeat. However, M.O.D.O.K. usurped Ultimo's decapitated body and rechristened himself UltiM.O.D.O.K., forcing Force Works to retreat to a bunker. The Deathloks breached the bunker, but, after examining M.O.D.O.K.'s files on them, War Machine connected himself to the command processor of one of the Deathloks that reigned over the rest, and commanded them against UltiM.O.D.O.K., forcing him into a magma-filled fissure created by Quake. As a result, all of the Deathloks also fell into the fissure and were destroyed. Even Rhodes attempted to jump into the fissure due to being affected by the command processor's programming, but he was stopped by his teammates and returned to normal afterwards.[1]

Like this? Let us know!
Retrieved from "https://marvel.fandom.com/wiki/Deathloks_(Earth-616)?oldid=5817593"
Community content is available under CC-BY-SA unless otherwise noted.