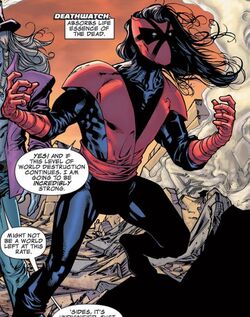 Deathwatch posed in the mortal world as crime boss Stephen Lords. His activities often lead to casualties that he then fed off of to empower himself. He also wanted to gain the position of the Kingpin.[1]

He also became an enemy of Wolverine's after Logan encountered some of his men in Madripoor.[2]

Deathwatch's major scheme involved a large amount of a potent biotoxin, enough to devastate New York and New Jersey. A rival gang had stolen the canisters and hid out in the Cypress Hills Cemetery. Deathwatch ordered his Deathspawn ninjas and Blackout to go after them and regain the canisters.[1]

In the ensuing firefight Ghost Rider (Daniel Ketch) emerged. Deathwatch ordered Barbara Ketch's murder and other events to try and draw the Ghost Rider out. He also tried to reclaim the canisters, but both the Kingpin and Ghost Rider continued to interfere with his plans.[3]

On one occasion he lured the Rider into an office building then had it destroyed, feeding him with hundreds of innocent employees. He ordered Blackout, Snowblind, Troll, and Hag after the Rider.[4]

He waited for Ghost Rider in a hospital where Snowblind was recovering. During their battle, Deathwatch was stabbed by the Ghost Rider's mystic chain, apparently killing him.[5]

Hag and Troll made several attempts to revive their Trans-Lord master, stopped by Blaze, Ketch, and Venom.[6] He would return to some semblance of life shortly before the rise of Zarathos and the Lilin.[7]

At some point, Deathwatch was imprisoned in the Raft. He escaped during the riot. Deathwatch joined the Hood's gang to take advantage of the split in the superhero community due to the Superhuman Registration Act. He helped the group in their plot against the New Avengers. During a battle he was taken down by Doctor Strange.[8]

Deathwatch and Blackout confronted the neophyte Ghost Rider, Alejandra Jones, and fared poorly against her.[9]

Deathwatch attended a meeting of various villains organized by the Wizard to discuss what to do about Doctor Doom who had unexpectedly decided to become a superhero and become the new Iron Man. As the Hood brought up the idea of forming a gang of villains to take Doom out, Doom suddenly appeared and took down all of the villains present.[10] He later participated in an ambush against Doom along with many of the other villains that Doom had earlier defeated.[11] He also attended another meeting to discuss the Hood's rise as the new Kingpin of crime[12] before joining Hood's Gang once more in ransacking Castle Doom in search for Doom's fortune.[13]

As a Trans-Lord, Deathwatch constantly emits a 'death field'. This allows him to draw energy from pain and death to increase his powers. Deathwatch can establish a mental link via touch. He uses this to gain information as well as to harm his victims.

Skilled in ninjutsu and martial arts.

Like this? Let us know!
Retrieved from "https://marvel.fandom.com/wiki/Deathwatch_(Earth-616)?oldid=6119156"
Community content is available under CC-BY-SA unless otherwise noted.