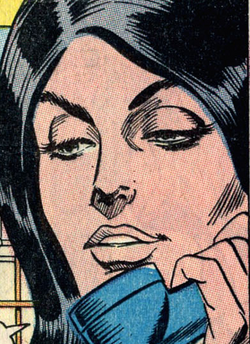 Deborah "Debbie" Harris dated "Foggy" Nelson in junior high. They met again when her father, Bernard Harris, became a candidate for Abner Jones' reform party.[1]. Debbie was involved in a plot to convince Nelson to run for the party as well. She pretended to be kidnapped by the Ani-Men; however, when the Organizer asked her to help him assassinate the mayor, she turned from the party and helped Daredevil in bringing them down.[2]

Debbie still went to jail, but was quickly released, due to her testimony in the trial against the Organizer.[3] She contacted Foggy again and began a relationship with him, only in secret at first, because he was running for district attorney at the time and she thought it could hurt his career if it was known that he was dating an ex-convict.[4] Despite these difficulties, the two became engaged and eventually got married.[5][6]

Their marriage; however, later went bad due to her believing that Foggy was nothing more than a boring lawyer; and it eventually lead to a divorce after her affair with Micah Synn, whom she was initially unaware was a killer, was exposed.[7]

Despite Foggy wanting to reconcile, Deborah moved on and she started dating a man named Carleton Corona, leading Foggy to decide to leave her be.[8]

Like this? Let us know!
Retrieved from "https://marvel.fandom.com/wiki/Deborah_Harris_(Earth-616)?oldid=4598079"
Community content is available under CC-BY-SA unless otherwise noted.