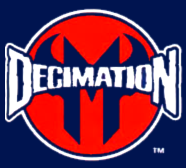 After altering reality so mutants were the dominant race, the Scarlet Witch then changed reality again, this time attempting to rid the world of the mutant gene, by casting another spell, "No More Mutants",[5] de-powering a massive majority of mutants.

The Decimation reduced the mutant population down to a few hundred, as most mutants were depowered and some others were killed as a result of losing their powers.

In total, 986,618 mutants were either depowered or killed by the Decimation.[7]

At the time of the Decimation, it was first estimated that 91.4% of the world's mutant population lost their powers overnight.[8] The US Government estimated a number of 198 mutants,[9] cataloged, but acknowledged that there were a few thousands,[9] around 300 individuals who were recognized as mutants,[10] and Tony Stark admitted that a low estimate had been produced.[9] Dani Moonstar stated that there were 198 known mutants, but others had remained off the grid until then, including Jonas Graymalkin or Leon Nunez,[11] but also known mutants, like the "199th mutant", off the record of the 198 as part of a deal with the government,[10] or Wiz Kid who hacked into S.H.I.E.L.D.'s database.[12][citation needed]

In the sole Xavier Institute, the mutant students count went from 182 to 27.[20]

Many mutants thought to be depowered were later revealed to have maintained their powers, having hidden their mutant powers and/or their presence to the world, while many of the still-powered were killed during the violence that followed the Decimation.

These different counts, along with the low number of individuals using their powers in public made some calculations very risky and absurd:

In Japan, except for a few exceptions who entered service for the Japanese government, all mutants were officially depowered.[24]

The Sapien League took advantage of the situation by attacking the mansion and any mutants attempting to reach it.[20]

The X-Corp office of Paris was bombed, and Cyclops consequently dissolved the organization.[20]

The 198 at the Institute

The Xavier Institute became a haven for those who still had their mutant powers, many of them attempting to escape persecution. Against the wishes of Institute professors Emma Frost and Scott Summers, the government assigned Sentinel Squad O*N*E to protect the mansion and its inhabitants.[28]

Mutants at the Institute rallied around the number "198", an early government estimate of how many powered mutants were left in the entire world.[29]

Reporter Sally Floyd interviewed a number of depowered mutants for her Mutant Diaries report. However, a serial killer calling himself the Ghoul murdered several of those whom she interviewed, leaving "Not enough died" as a marker. The Ghoul was eventually killed in an explosion during an attempt to capture him by the X-Men. Given the nature of his teleportation powers, it's possible that the Ghoul survived.[30]

Many events were directly influenced by the energy release or by the disruption of reality.

The energy previously possessed by the mutants was orbiting Earth after the events of M-Day. While passing some orbiting rocks, the energy awakened Vulcan (Gabriel Summers).[31]

Eventually leaving orbit and entering atmosphere, the energy was absorbed by the Collective.[32]

X-Factor had to face both Rictor's powers loss, and the beginning of the end for Mutant Town, dealing with sad or happy depowered mutants as well as anti-mutants activists.[33]

Somehow, Onslaught was brought back to life, and chased Franklin Richards to Counter-Earth.[34]

All dead, banished, or inanimate, the Salem's Seven were all returned, including Brutacus who is part mutant.[35]

Frightened by the end of mutantkind, Beast went on the search for a cure.[36]

Effects on mutants and X-Gene

The X-Gene was erased from the Depowered Mutants, without any trace.[37] Depowered mutants were detected as Humans.[38][39]

The Decimation was supposed to have affected each DNA's mutant, even separated from his source: Mutant Growth Hormone (MGH) provided by lot of mutants was revealed to be inert, as their origin mutants were depowered. On the other side, Whirlwind's MGH was still active while himself kept his powers.[40]

A clone of the Blob was produce, while his clonal source was depowered.[41]

Effects on Multiverse and non-natives Mutants

Almost all mutants from alternate realities residing in the Earth-616 reality retained their powers (i.e. Bishop, Dark Beast, Rachel Grey, Sugar Man, etc.),[42] but this was just a coincidence, since Jon Spectre lost his powers.[43] There also appears to be some confusion about M-Day's effects on the Multiverse.

According to Forge there were no more mutants in the entire Multiverse. Using a combination of Cerebra's and Nimrod's technologies, he showed to Beast that Age of Apocalypse's, Nimrod's and Bishop (Earth-1191)'s timelines were shut down or empty of mutants. After the birth of Hope Summers, two future timelines with mutants suddenly became active again: Earth-1191 (which was earlier "shut down") and Earth-6124.[44] Numerous X-Gene positive alternate realities have been seen since then, indicating that Hope's existence reversed M-Day on a multiversal scale, not just in Earth-616.[45]

While the M-Day effect was initially thought to be irreversible, some methods proved more or less effective in restoring mutant powers. Please consult the Repowered Mutants and the ways they got their powers back.

In concordance with the High Evolutionary, Magneto was able to construct a machine to restore his powers, using the Dreaming Celestial and the product of what they called "a Celestial lobotomy". The machine however, was not only nearly impossible to construct but extremely dangerous. The process worked, and Magneto regained his mutant powers at the cost of the machine itself.

Apocalypse managed to restore the powers of Polaris (depowered by M-Day) after turning her into a Horseman. It was believed that Apocalypse simply gave her powers similar to her old ones through other means, but he seemingly managed to re-activate Polaris's X-Gene.[46]

After one of Legion's rogue personas, dubbing itself Moira, altered reality to create a world of constant war and struggle where he was a hero, some aspects of this reality bled through into the real world after Legion restored it. One of these aspects were the powers of Chamber. In this reality created by Legion, Chamber once again had his mutant powers in their old state, and upon returning reality to it's original form, Chamber kept his restored powers.[47]

After falling into the M'kraan Crystal and drifting into the White Hot Room, Professor Xavier regained his telepathic powers upon emerging.[48]

Wanda Maximoff was able to reverse the M-Day effect on one mutant, Richtor. After losing the source of her enhanced powers, the Life Force, however, Wanda was unable to reverse it for anyone else.[49]

The return of mutant messiah Hope Summers to the present triggered the first activated mutations since her own and M-Day. It is believed that this, along with Hope's unique ability to stabilise these mutants, were an extension of her relationship with the Phoenix Force.[50]

The Phoenix Force travelled to Earth to claim Hope Summers as its host in order to reverse the Scarlet Witch's curse. It did so successfully, after Hope used its powers to re-ignite mutations across the world.[51]

Known as the 198 (which also was the name of a group of mutants gathered into the Xavier Institute).

Among the unnamed powered mutants to be counted are Gargouille's boyfriend[52] and a fire-breather,[53] both killed by Predators X. Utopia[54] and Ravencroft Asylum for the Criminally Insane[55] also appeared to had various unidentified mutants.

The Decimation extended even to mutants who were already dead on M-Day. When Selene reawakened the dead of Genosha and elsewhere, she discovered that many of her undead subjects no longer possessed their mutant abilities as a result of M-Day.[56] Please consult the Known Pre-M-Day Deceased Powered Mutants.

Retrieved from "https://marvel.fandom.com/wiki/Decimation?oldid=5685371"
Community content is available under CC-BY-SA unless otherwise noted.