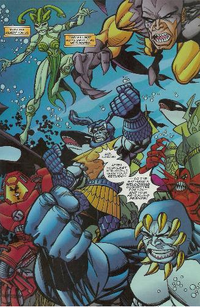 Base of Operations
Atlantis
Affiliations

Origin
Team was recruited by Attuma

The Deep Six was a team of Atlantean criminals recruited by Attuma. The team consisted of Attuma, Nagala, Orka, Piranha, Sea Urchin, and Tiger Shark.[1]

Namor the Sub-Mariner and the Defenders traveled to the outskirts of the nation of Atlantis, they were attacked by the Deep Six and Attuma's Barbarian Hordes. The Defenders then teleported to safety because they needed to create a strategy first.[1]

After a couple of days, the Defenders returned to deal with the threat. The heroes utilized a strategy of keeping Attuma and Nagala busy, while the other team members could be defeated much more easily. Hulk refused to follow the plan and confronted Orka alone, but the rest of the team followed orders.[2]

The Defenders defeated Piranha, Sea Urichin, and Tiger Shark all relatively easily. Nagala was left, but she was stopped by the Silver Surfer and was knocked unconscious. Namor confronted Attuma alone and beat him in single contact. Deep Six apparently decided to disband not long after this battle.[2]

Retrieved from "https://marvel.fandom.com/wiki/Deep_Six_(Attuma)_(Earth-616)?oldid=5122603"
Community content is available under CC-BY-SA unless otherwise noted.