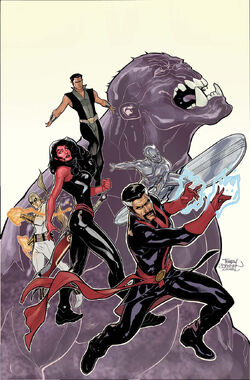 Base of Operations
Sanctum Sanctorum
Affiliations

Entering the dream of his disturbed friend Notebooks Joe, Doctor Strange saw a reunion with the Defenders.[1] Not long after, the Hulk appeared at the Sanctum Sanctorum asking for his help in stopping a great menace. Nul, the Serpent's Breaker of Worlds, was unleashed upon the world as consequence of the Hulk destroying his hammer.[2] Doctor Strange then gathered King Namor, the Silver Surfer, the Red She-Hulk, and the Immortal Iron Fist to go on a quest to save mankind.[3]

Prester John planned to lure Nul to Wundagore Mountain to make him destroy the Concordance Engine hidden there, thus also destroying reality and allowing him to restart in another universe. The Defenders were able to foil his plan after Prester Omega, guardian of the Concordance Engine, destroyed Nul. The energies of the Engine affected them, binding them to it and making them unable to speak about it. They took the Engine and Prester Omega to the Sanctum Sanctorum.[4]

The Defenders later found the wreckage of the Nautilus, accidentally releasing the Ninety-Nine Daughters of Pontus. They found another Concordance Engine inside it.[5] The Immortal Weapons were killed by the Prince of Orphans (John Aman), who had a history with the Engines, as did Iron Fist's predecessor, Orson Randall.[6]

The Defenders journeyed to Wakanda on their way to Z'Gambo, home of the Prince of Orphans. After Aman broke the ceasefire between the two nations by killing King T'Challa, the Defenders invaded Z'Gambo and confronted him. They were aided by the Black Cat, who was on a mission for the Council of Antiquarians to steal the third King Solomon's Frog from Aman. When the Defenders reunited with the Council, Aman revealed the three Frogs were parts of another Concordance Engine, which he used to blast the Defenders away.[7]

They emerged in an alternate reality and decided to enlist the help of the native Nick Fury. However, Hydra intervened, forcing the Silver Surfer to convince Prester Omega to teleport them back to their reality.[8]

Retrieved from "https://marvel.fandom.com/wiki/Defenders_(Earth-11127)?oldid=5594307"
Community content is available under CC-BY-SA unless otherwise noted.