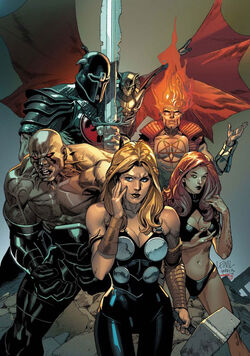 The Defenders are a group of amateur vigilantes who dress up as super-heroes. None of them have superpowers, although they claim to be experienced in crime-fighting. However, the group is only interested in becoming celebrities as a self described super-hero team rather than actually going out and stopping crimes or saving lives. Their members included Power Man, Hellcat, Nighthawk, Valkyrie, Black Knight, and Son of Satan. They were later joined by Whiz-Kid, a wheelchair bound boy suffering from polio. He claimed to have the ability to vary the temperature of certain inorganic materials.[1]

Henry Pym was invited to join them, and he accepted, adopting a new identity - Ant-Man. The Defenders were thrilled at the prospect of having an actual superhuman join their team, and convinced Pym they were a serious project. Unfortunately, their first mission together was a disaster, and Pym, who wanted to remain out of the spotlight, was forced by the Valkyrie to reveal himself to save them, humiliating himself in the process.

After Henry Pym's embarrassing stint, Loki (under his alias Gunnar Golmen) approached Valkyrie and offered her and her team the chance to have actual superpowers. They accepted and fell under Loki's servitude.[2] Thereafter, Pym rejoined the Ultimates and the empowered Valkyrie was trained by Thor. After the events of Ultimatum, the remaining Defenders mysteriously disappeared from prying eyes for three weeks, and even away from S.H.I.E.L.D., who were unable to contact the Son of Satan -- their insider in the group. They attacked the Ultimates in order to steal Thor's hammer, which they succeeded in doing.[3] Following their theft, the Defenders were boringly living in Hellcat's apartment, which was about to be evicted, before being shortly faced with retribution from the Ultimates.[4]

Retrieved from "https://marvel.fandom.com/wiki/Defenders_(Earth-1610)?oldid=5752508"
Community content is available under CC-BY-SA unless otherwise noted.