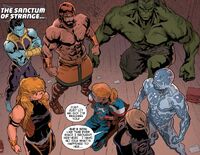 We're a Downtown group. We always have been. Alchemax is purely interested in uptown activities. And our headquarters is in the heart of Downtown. It's where we're needed. We cannot relocate here. So thanks, but it's not happening.

The Defenders were assembled under unrevealed circumstances. They came to the attention of the Avengers when they ran into Defender John Eisenhart while looking for Martin Hargood, who was wanted in connection for a failed attempt on the life of Avenger Captain America. Eisenhart had Hargood cornered in the Latverian Cuisine restaurant. When the Avengers intervened, Eisenhart transformed into the Hulk and was later joined by the rest of the Defenders team.[1]

Captain America, however, disagreed with Stone's orders, believing that the Defenders had a right to operate without Alchemax's interference. With help from fellow Avenger Hercules, Captain freed the captured Defenders while fighting off her fellow Avengers. Captain's husband then triggered a failsafe that changed her back into her civilian persona of Roberta Mendez, which had no memory of her superhero persona. Strange was able to rescue Mendez.[3]

During the Defenders' rescue attempt by Mendez, Hargood was able to escape custody and use Alchemax's virtual unreal laboratory to summon the monster the Dweller-in-Darkness. The situation became so dire that Stone that he called not just the Avengers but also allowed the Defenders to help without fear of being arrested. While Avenger Iron Man and Defenders Silver Surfer, Hulk, and Sub-Mariner dealt with the Dweller, the other Avengers and Defenders dealt with Hargood and knocked him out. Strange was then able to send the Dweller back to where he came from. As an act of gratitude, Stone allowed the Defenders to continue operating independently.[4]

Retrieved from "https://marvel.fandom.com/wiki/Defenders_(Earth-23291)?oldid=5233045"
Community content is available under CC-BY-SA unless otherwise noted.