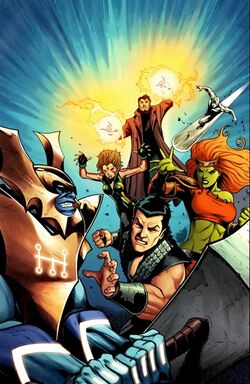 The record of the Defenders has been a proud one so far. I am certain that whatever the future may bring, nothing will ever change that.

While trying to defend Earth from the extra-dimensional, demonic beings called the Undying Ones, Sorcerer Supreme Dr. Strange manipulated Prince Namor into aiding him,[3] and then teamed with the monstrous Hulk to ward off the demons.[4] Later, when the Yannian scientist Yandroth menaced Earth with the Omegatron doomsday device, Dr. Strange persuaded a reluctant Hulk and Namor to help him thwart Yandroth's scheme, forming the "non-team" known as the Defenders.[5] After Yandroth's defeat, Hulk and Namor vowed never to work together again, but Strange managed to hold their informal alliance together over time. Unlike other super-teams, these Defenders had no charter or by-laws, no permanent headquarters, no fixed roster, and little affection for each other.

The Defenders' ranks soon grew. Due to the group's unofficial nature, any individual who assisted them could be considered a member, but only a select few fit the two major criteria of true membership: that they consider themselves Defenders, and that they are accepted by the continuing core group as Defenders. Strange's disciple, Clea, assisted the team on an irregular basis. The alien Silver Surfer's longtime link with the Defenders began when they aided him against Calizuma and his Warrior Wizards, agents of the Undying Ones.[6] The Asgardian warrior goddess Valkyrie became a mainstay of the team (first in the mortal host body of former Undying Ones follower Barbara Norriss and later in her own form) after helping them defeat Casiolena.[7] The archer Hawkeye fought several battles with the group before leaving their ranks.[8] Nighthawk, a reformed villain and head of Richmond Enterprises, became a long-term core Defender after a near-fatal battle with his ex-partners, the Squadron Sinister, and their extraterrestrial employer Nebulon the Celestial Man, who became one of the Defenders' most enduring foes.[9][10][11] The half-demonic Daimon Hellstrom helped rescue the Hulk from Hell[12] and aided the team in other matters, eventually becoming a full Defender. Mercenary super hero Luke Cage reluctantly aided the team in several battles[13] until Nighthawk placed him on retainer to secure his full-time services,[14] though Cage felt out of place and soon quit the group.[15] The dissident Russian heroine Red Guardian became a member after being allied to the US to assist in an operation on Nighthawk,[16] and Barbara Norriss's ex-husband Jack Norriss became a regular - if sometimes rather unwelcome - associate of the group, at one point even occupying Nighthawk's body for a time.[17] Occasionally, their paths (almost) crossed with the mysterious, murderous Elf with a Gun, though they somehow never actually encountered him; another Elf would later become mixed up in their affairs though, as an agent of the alien Tribunals.

The team also attracted an eclectic array of recurring associates and occasional members such as Daredevil,[18] Yellowjacket,[19] and Devil-Slayer. Hellcat, a former model turned superheroine, was the next major long-term recruit.[15] The Gargoyle, an elderly man trapped in a demon's body, joined the Defenders in their quest to prevent the grouping of minor demons known as the Six-Fingered Hand (Avarrish, Fashima, Hyppokri, Maya, Puishannt, and Unthinnk), who were being manipulated by an alliance of powerful demonlords (Mephisto, Satan Marduk Kurios, Satannish, and Thog), from merging the realms of Hell with Earth.

The ever-shifting ranks of the Defenders battled menaces such as Dormammu dread lord of the Dark Dimension;[20] Xemnu the Titan, the psionic alien conqueror; the Headmen, megalomaniacal scientists whose experiments warped their own bodies;[17][11] Shazana who took control of Nighthawk's ex-girlfriend Trish Starr;[21] Egghead's Emissaries of Evil;[22] Null the Living Darkness and the Undying Ones, who threatened Earth yet again. The Defenders were even tricked into fighting the Avengers when Dormammu and the Asgardian god Loki manipulated them into assembling the Evil Eye of Avalon. After several skirmishes, the two teams joined forces and foiled Dormammu's scheme.

The Defenders' existence was revealed to the world in an unauthorized television documentary by Valkyrie's friend, filmmaker/television producer Dollar Bill. As a result, a horde of well-meaning super heroes arrived at the team's headquarters (the Richmond Riding Academy) and declared themselves Defenders (while others, such as Captain Mar-Vell, Ms. Marvel (Carol Danvers), and Paladin, decided against Defenders affiliation); but all of these "Defenders for a Day" decided to quit after a single harrowing day in action with the team.

When Arisen Tyrk was deposed as God-King of the extra-dimensional Other Realm, he fled through a damaged portal that split him into various fragments. Some of Tyrk's sentient fragments landed on Earth and plagued the Defenders as the crazed Lunatik vigilantes while another fragment became drama professor Harrison Turk. Other fragments fell under the control of the powerful other-dimensional sorcerer known as the Unnameable and landed on the alien Tunnelworld, where they allied themselves with the vile Ytitnedion of the Buzzard People. When the Defenders entered Tunnelworld to investigate Lunatik's origins, they joined with Aeroika and the alien sorcerer Xhoohx, liberating the cylindrical realm from the influence of the Unnameable and Ytitnedion. By this time, the founding Defenders were only occasional participants in the group; they soon quit the team altogether after the race of energy beings known as the Tribunals hoaxed Strange, Hulk, Namor, and the Silver Surfer into believing that the interaction of their karmic energies would eventually lead to the destruction of Earth. The four heroes split up, resolving never to work together again.

With the team's most powerful members gone, the mutant Beast (an X-Men founder and recent Defenders recruit) tried to reorganize the Defenders as a more formal team: the New Defenders. This team, based at The Angel's "Aerie" home in Colorado, consisted of three former X-Men (Angel, Beast, and Iceman), former Defenders Valkyrie and Gargoyle and new recruits Moondragon and Cloud, later joined by the Atlantean Andromeda and nominally led by the Angel's long-term girlfriend Candy Southern. Despite a number of early successes though, including their defeat of the Secret Empire, the team was plagued by problems, many of them relating to the Dragon of the Moon, a mystical entity which possessed Moondragon. Eventually Valkyrie, Gargoyle, Moondragon, Andromeda, and new recruits Interloper and the team's psychotic former adversary Manslaughter were all apparently killed battling the Dragon, and the surviving members (the former X-Men) disbanded the Defenders and went off to found X-Factor. The apparently deceased members were later resurrected, but most of them have never operated as Defenders since then.

Later, after the Tribunal's apocalyptic prophecy was exposed as a hoax,[23] Dr. Strange, the Hulk, Namor, and Silver Surfer reunited to battle Shanzar, the Sorcerer Supreme of the Strange Matter dimension, who was trying to resurrect the Elder God known as the Wild One. Possessing the body of Namor, Shanzar succeeded in performing the ritual needed to bring back the Wild One, but the Defenders were able to trap the Wild One in the Strange Matter dimension, forcing Shanzar to concede defeat.

The original Defenders next reunited to once again battle Yandroth, who was tapping the power of the Earth goddess Gaea to cause worldwide chaos. The Defenders prevailed, but a dying Yandroth used Earth's power to place a curse upon the Hulk, Dr. Strange, Namor, and Silver Surfer that automatically united them whenever a catastrophe placed Earth in peril. The curse also had a secret side effect, causing the rationality of the four heroes to be submerged by their more selfish desires. The slain Yandroth's consciousness secretly fed off the violent energy created by the cursed Defenders, planning to be reborn more powerful than ever. Corrupted by the curse, Strange, Namor, Hulk, and Surfer abandoned their fellow Defenders and formed the Order, a group dedicated to ending any perceived threat to world peace by any means necessary. Operating out of the floating metropolis Sky Island, the Order opposed all who challenged their new world order until the remaining Defenders broke Yandroth's curse and restored the Order's humanity. Gaea empowered Nighthawk to gather the Defenders at will should the need arise.

A version of the Defenders led by Nighthawk was also a part of the Initiative program, but it is as yet unknown whether these "Last Defenders" will work together again or become a part of the main group.

A new Defenders featuring Loa, Namor, Dr. Strange, Silver Surfer and Lyra was formed to help in Atlantis's battle against Nerkkod, one of the Serpent's Worthy. Being outnumbered, Dr. Strange called every hero who was part of the Defenders to help, defeating Nerkkod.[24]

Like this? Let us know!
Retrieved from "https://marvel.fandom.com/wiki/Defenders_(Earth-616)?oldid=5888893"
Community content is available under CC-BY-SA unless otherwise noted.