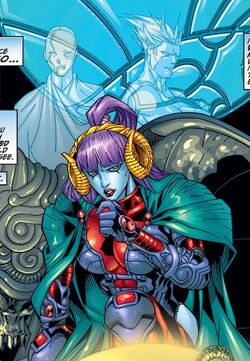 The Defenders of Earth-99315 live in a world where the Earth was first invaded by the Kree and then decimated by an insectoid race similar to (not different from) the Brood. The team consisted of the sorceress Margali Szardos as well as the spirits of Destiny and Legion. The trio joined forces to shift the karmic balance that was offset by the various wrongs they committed in their lives. In order to liberate their world from the alien invaders, Margali and her allies used their mystical powers to transport the Fantastic Four of Earth-616 to Earth-99315. There the foursome assisted the warriors Redwing and Lucas kill the queen of the invaders. With the task completed, Margali then transported the Fantastic Four back to whence they came.[1]

Like this? Let us know!
Retrieved from "https://marvel.fandom.com/wiki/Defenders_(Earth-99315)?oldid=6453077"
Community content is available under CC-BY-SA unless otherwise noted.